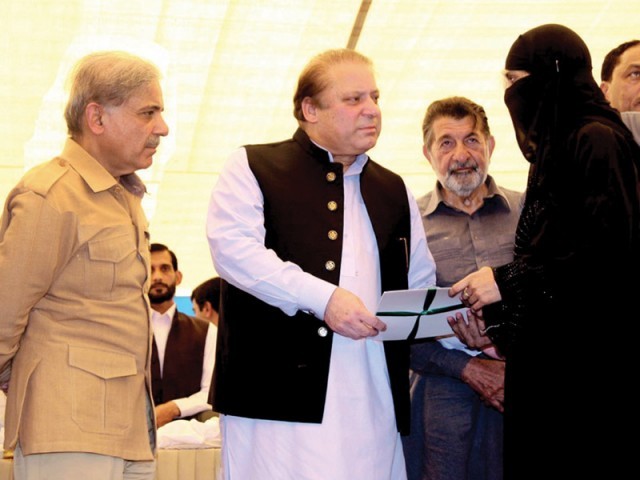 PML-N chief Nawaz Sharif hands over documents of a house to a woman during the inauguration of the Labour Colony Defence Road. PHOTO: ONLINE

In a rare appearance together, the Sharif brothers on Tuesday attended an event organised to commemorate Labour Day. However, they used the occasion to launch another frontal attack on the PPP-led coalition government.

“Double digit inflation and the deepening energy crisis have made it difficult for workers to live comfortably even with a monthly salary of Rs20,000,” the elder Sharif said, criticising the government for its inefficiency.

He called upon the people to join his party in protests against the government which “is defying the rulings of the Supreme Court”.

Pakistani people had struggled for the restoration of dozens of judges sacked by former military ruler Pervez Musharraf and they would not allow the incumbent government to ridicule the judiciary, he added. “Pakistan is not made only for Gilani and Zardari. It’s a country of 180 million.”

He asked the people to stand by the judiciary the way they did in 2009 during the long march for the reinstatement of the judiciary.

Reiterating his conviction for the cause, Nawaz said whosoever supports him would definitely succeed. He urged those reluctant to join his protests to embrace his movement.

Nawaz said that in 2009, President Asif Ali Zardari tried to restore PCO judges, but did not succeed.

“Instead of working to empower the judiciary, the president became the epicentre of corruption cases pertaining to rental power plants and National Insurance Company Limited, etc,” he said.

“Each day people with tainted reputations are appointed against key administrative slots. I have never witnessed corruption on such a level, where sons, wives, friends and cousins of functionaries are openly involved.”

The PML-N chief defended his aggressive stance saying he was “fighting for the survival of Pakistan.” He said the current leaders had turned the nation into a laughing stock and this prompted him “to stand up for the sake of the nation”.

He vowed to address all crunch questions if he emerged victorious in the upcoming elections.