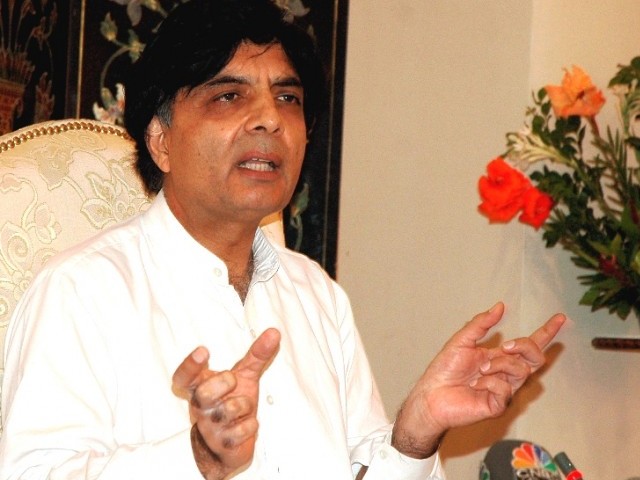 ISLAMABAD: The rivalry between the government and opposition heated up on Sunday with continued accusations of corruption and name calling.

Nisar clarified that the PML-N leadership had returned a loan they received from a private bank years ago and added that the Lahore High Court (LHC) had rejected a case in this regard against the Sharif brothers.

“He (Malik) has had a stinking reputation throughout his life,” Nisar said and added: “The minister himself is a culprit since he did not take action in the last four years against his allegations, if they were true.”

Meanwhile, Malik continued his diatribe against the PML-N leadership and said he would provide evidence to the Supreme Court to prove their alleged involvement in money laundering cases.

However, the interior minister did not elaborate on the matter and also failed to explain how he planned to approach the apex court considering there are currently no cases against the Sharif brothers.

Addressing the media, he said: “I will prove that PML-N leaders are the ‘kings of liars’.”

On Saturday, he had claimed that the government was set to file a reference to the National Accountability Bureau against the Sharif family in various corruption cases.

He continued to allege that he had evidence that the PML-N leaders had siphoned off public funds worth $32 million. He said that if Nawaz and Punjab chief minister Shahbaz Sharif have the “courage” they could challenge his claims. “If they are not guilty, they should prove me wrong.”

Malik added that if the PML-N threatened him, he would respond with “10 threats.”

He claimed that a high court in London passed a judgment declaring the Sharif brothers defaulters. “It was the people’s money that they had plundered and taken to London.”

Meanwhile, PML-N spokesperson Pervez Rasheed snubbed Malik’s allegations and said they have been rejected by different courts many times in the past.