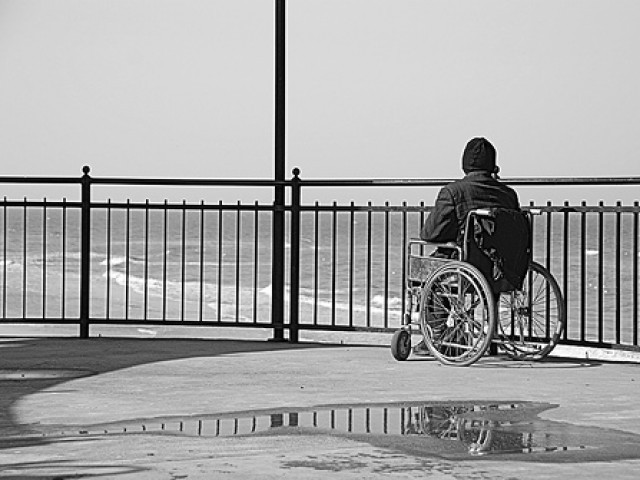 District is believed to have the largest population of physically challenged.

A staggering number of people – 10,323 to be precise – were left physically challenged in the insurgency-plagued valley of Swat during the three years Mullah Radio and his cohorts held a reign of terror there.

The figure is revealed by officials who register disabled persons across the country and tabulate district-wise data.

Almost all of them were believed to be victims of the militancy Mullah Fazlullah (widely known by his nom de guerre, Mullah Radio) and his men promoted in the region during the days of chaos.

After being rendered disabled, they swelled the ranks of their peers across the country whose lot it is to continue to struggle for their survival. They now number close to 3.2 million.

Amidst various economic challenges faced by Pakistan, little has been done to ensure the welfare of disable people,  who make up 2.2% of the country’s total population, officials told The Express Tribune.

Records revealed that over 2.3 million of these physically impaired people live in the rural areas while 1.2 million live in urban areas. As many as 1.7 million reside in Punjab alone.

The World Health Organisation (WHO) in its estimation said that around 10% of Pakistan’s population was disabled and that the census in 1998 reported an extremely low figure. The deaf/mute constituted 7.43% of Pakistan’s total disabled population.

The National Database Registration Authority (Nadra) has registered over 110,072 people as disabled so far. Moreover, Pakistan, unfortunately, does not have a Ministry for Social Welfare since its functions have now been transferred to the provinces after the passage of the 18th Amendment. The ministry looked after issues related to physically impaired persons and also collected data of over 6,789 disabled persons till 2009.

The officials who registered disabled persons revealed that over 10,323 people were identified as physically impaired in Swat during the last three years. Almost all of them were victims of the Tehreek-i-Taliban led militancy which plagued the area in 2009.

Director General Special Education and Social Welfare Mustafain Kazmi said that at least a quarter of children and adults were recently identified as having some kind of disability due to militancy in the bordering areas. Polio and some other diseases also broke out as teams could not visit the areas during the last four years.

Over 6,172 disabled persons are registered in Thatta, where officials cited bad weather, poor health facilities and non-availability of clean drinking water as the main causes of such aggravated numbers. Officials also registered 4,027 physically challenged persons in Rawalpindi, over 2,936 in Lahore and 1,358 in Faisalabad.

The government has around 58 functional institutions, 28 institutions in Sindh, 100 in Punjab, 21 in Khyber-Pakhtunkhwa and three in Balochistan, including a complex in Quetta, according to Pakistan Disabled Foundation Chairman Professor Shahid Memon. Many disabled people in Pakistan are living socially isolated, while struggling to participate in economic activities, he added.

Pakistan Muslim League-Nawaz MNA Rohale Asghar urged the government to form a legislation to improve the welfare of special persons. “I raised this issue in the National Assembly – disabled persons are the face of Pakistan,” he said. The fresh legislation will focus on quota for jobs as well as building more institutions for the physically handicapped in the country, he added.

Psychological scars: From the warzone to the couch