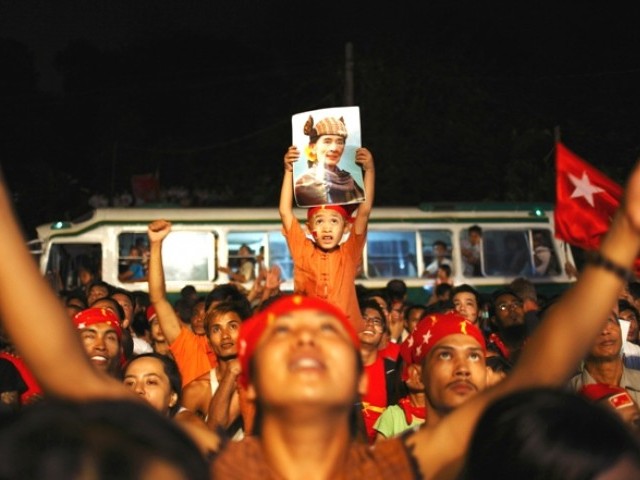 A child holds up a portrait of pro-democracy leader Aung San Suu Kyi, as election results are revealed on a screen in front of the head office of the National League for Democracy. PHOTO: REUTERS

YANGON: Myanmar’s opposition claimed a historic victory on Sunday for pro-democracy leader Aung San Suu Kyi in her first bid for a seat in parliament, sparking scenes of jubilation among supporters.

Thousands of people clapped and cheered outside Suu Kyi’s National League for Democracy (NLD) headquarters in Yangon after the party announced the Nobel Peace Prize laureate had won a parliamentary seat after by-elections.

Some people danced in the street while others wept with joy at the news, which if confirmed would mark a stunning turnaround for the former political prisoner, who was locked up by the former junta for most of the past 22 years.

“We have been waiting for this day for a long time. I’m so happy,” said NLD supporter Kalyar, who goes by one name.

Suu Kyi won an estimated 99 percent of the votes in Kawhmu constituency, according to NLD official Soe Win, based on the party’s own tally. There was no independent confirmation and official results were expected within a week.

The party also claimed it was on course to win all 44 seats it contested in Sunday’s by-elections, in which a total of 45 seats were at stake — not enough to threaten the army-backed ruling party’s huge majority in parliament.

US Secretary of State Hillary Clinton, in Istanbul for a meeting of the “Friends of Syria” group, said Washington was committed to supporting the nascent reforms in Myanmar that have been cautiously welcomed by the West.

“While the results have not yet been announced, the United States congratulates the people who participated, many for their first time in the campaign and election process,” Clinton told reporters.

Observers believe Myanmar’s new quasi-civilian government wanted Suu Kyi to win a place in parliament to burnish its reform credentials and smooth the way for an easing of Western sanctions.

“However, that’s definitely not enough to assume that it is indicative of how the process was conducted in other parts of the country and certainly not enough to talk about credibility of elections,” Malgorzata Wasilewska said.

Many of Suu Kyi’s supporters had earlier waited for hours in searing heat to catch a glimpse of the 66-year-old in the rural Kawhmu constituency, two hours’ drive from Yangon, where her main rival was a former military doctor with the ruling Union Solidarity and Development Party.

Voters, some in traditional ethnic Karen dress, queued patiently to cast their votes. In stark contrast to life under the junta, many openly expressed their support and affection for “The Lady”.

“There’s only been one person for us for 20 years,” said Tin Zaw Win.

“We believe in her and want to vote for her. Almost my whole village will vote for Aunt Suu,” he added.

Some people complained that their names were missing from the voter lists, although it was unclear how many were affected.

“I want to vote for Mother Suu but they haven’t given me my ballot paper so I’m here to demand it,” Zin Min Soe told AFP at a polling station.

“They can’t just lose my vote,” he said.

The NLD also complained of ballot-paper irregularities, notably that wax had been put over the check box for the party, which could be rubbed off the ballot later to cancel the vote.

It was not immediately clear how widespread irregularities were.

“This is happening around the country,” NLD spokesman Nyan Win told AFP. “I have sent a complaint letter to the union election commission.”

In the run-up to the eagerly awaited vote, the party decried alleged intimidation of candidates and other irregularities, and Suu Kyi said the poll could not be considered “a genuinely free and fair election”.

A 2010 general election, won by the military’s political proxies, was plagued by complaints of cheating and the exclusion of Suu Kyi, who was released from seven straight years of house arrest shortly afterwards.

The NLD swept to a landslide election victory in 1990, but the generals who ruled the country formerly known as Burma for decades until last year never recognised the result.

The seats being contested Sunday were made vacant by MPs who joined the government. The next general election is due in 2015.

After almost half a century of military rule, the junta in March last year handed power to a new government led by President Thein Sein, one of a clutch of former generals who shed their uniforms to contest the 2010 poll.

Since then, the regime has surprised even its critics with a string of reforms such as releasing hundreds of political prisoners.

But remaining political detainees, fighting between government troops and ethnic rebels, and alleged human rights abuses remain major concerns for Western nations which have imposed sanctions on the regime.

A US lawmaker who has drafted sanctions against Myanmar said it was premature to ease pressure despite Sunday’s vote.

Representative Joe Crowley said it was “important to keep things in perspective.”

“Far too many political prisoners are still locked behind bars, violence continues against ethnic minorities and the military dominates not only the composition but the structure of the government,” he said.

“Now is not the time for the international community to rush toward lifting pressure on Burma,” he added, referring to Myanmar by its former name.

Unlike in 2010, the government allowed foreign observers and journalists to witness Sunday’s polls. More than six million people were eligible to vote.

Zardari, Manmohan to meet over lunch