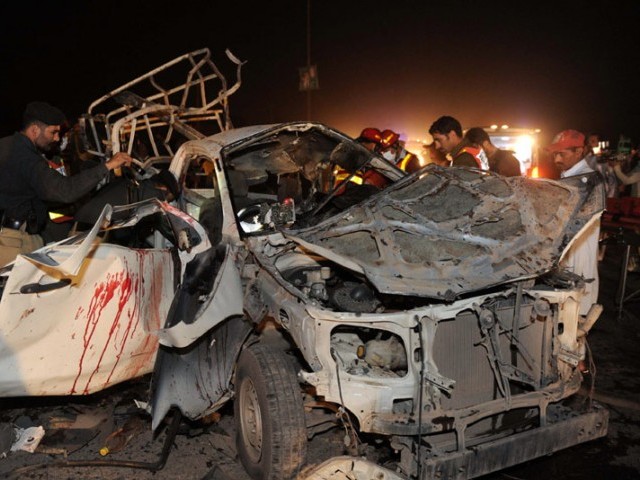 Pakistani policemen and rescue workers collect evidence at the bomb blast site in Peshawar on march 20, 2012. A bomb planted in a rickshaw killed two policemen and wounded four other people in the northwestern Pakistani city of Peshawar on Tuesday, police and hospital officials said. PHOTO: AFP

PESHAWAR: A blast trageting a police vehicle patrolling on Peshawar ring road killed one official and injured four others.

According to SP City Asif Iqbal, a vehicle from the Banamari police station was on routine patrol when a bomb detonated. Due to the blast sub-inspector Ali Hazrat was killed while three other officials were injured.

The injured included Shahid, Imtiaz and Mir Zali. A passerby, 12 year old Zaman too was injured by the blast.

The injured had been shifted to the Lady Reading Hospital. Two of the injured, Imtiaz and Mir Zali were said to be in critical condition.

Bomb Disposal Squad officer Shafqat Malik said that 12 kilograms of explosive material had been planted in a rickshaw which was remotely exploded as the police vehicle crossed it. The blast destroyed the rickshaw, the police patrol and another civilian car.