Sindh is not a card, Sindh is a cause, says Marvi Memon

Sindh is not a card, Sindh is a cause, says Marvi Memon

Memon recall­s her meetin­g with Nawaz Sharif, saying he offere­d her a platfo­rm to raise the issues she cared about.
By Saba Imtiaz
Published: March 15, 2012
Tweet Email 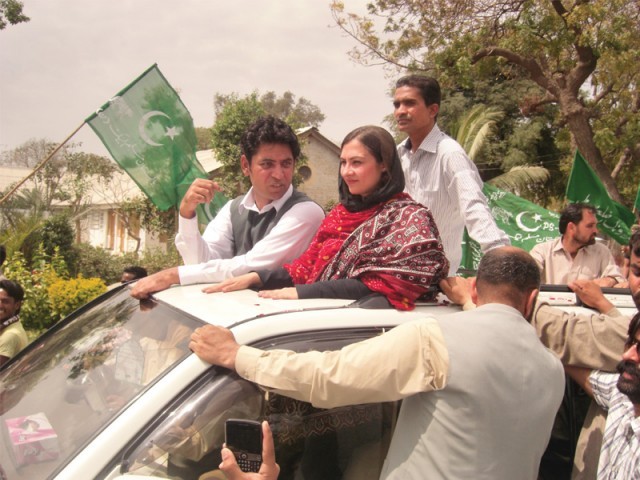 Marvi Memon counts the days she has been working in Sindh on her fingers. In 10 days, she has been everywhere – from the Jinnah International Airport where she was greeted by scores of Pakistan Muslim League-Nawaz (PML-N) supporters to the Sindh High Court for Rinkle Kumari/Faryal Shah’s court appearance – and the confident, assured politician looks set to continue her commitment “to her people”.

Memon’s brand of political activism – supporting causes as diverse as the cases of the families of the victims who died in the AirBlue flight crash to female health workers asking to be given permanent jobs – has earned her kudos in Sindh where people will, without prompting, praise Memon for having taken up their issues. Memon updates her Twitter account with her day’s activities, responds to queries and is constantly on the move. Since she’s joined the PML-N, she has done short tours of Punjab and Azad Jammu and Kashmir and is off on a whirlwind tour of Sindh soon.

Early this month, Memon finally announced that she was joining the PML-N.

Life with the PML-N appears to suit Marvi Memon.

“For the first time, I feel like I’m a part of a political party,” she stresses. “The PML-N is working on grassroots issues, has a structure… and is a national party.”

She smiles when she recalls her meeting with PML-N head Nawaz Sharif, saying he only spoke of her about policies and has offered her a platform to raise the issues she has always cared about.

While PML-N was once fairly prominent in Sindh, it has lost its allure over the years. Can Memon change that? She dispels the notion that she will only be working on provincial issues. But her party’s priorities are straightforward.

“There will be absolutely no compromise on the resources of any province, including Sindh, and they will be justly distributed,” Memon told The Express Tribune. “Sindh is sitting in an Intensive Care Unit, gasping for good governance,” she says, citing the lack of basic amenities and the gap between what Sindh deserves and it gets.  “Sindh’s institutions have gone pre-Moenjodaro and have to be brought back into the 21st century.”

While talking to The Express Tribune, she said that Sindh was not a jageer of the Pakistan Peoples Party (PPP) and Sindh’s cities are not going to be hostage to fascist parties.

Memon sees the rural-urban divide in Sindh as an outcome of what the two “status quo parties” in Sindh – the MQM and the PPP – have done. “It is unacceptable that the students of Sindh do not have access to education. The inequalities are because of these two parties.”

Additionally, she says the PML-N has categorically assured the people of Sindh that it will not allow province’s borders to be changed, but will support the creation of provinces  elsewhere in Pakistan if there is a need. Her other priorities in Sindh include issues such as the language bill, the state of law and order seen by the rise in kidnappings as well as discrimination against women.

The obvious reference to the Muttahida Qaumi Movement (MQM) raises the question – will the PML-N work with the MQM again like it has in the past? “We will work with all political forces. But the PML-N will not compromise and be cowed down by threats.”

At the press conference to announce she was joining the party, Memon raised a rather interesting point – that the PML-N had realised the dangers of ‘establishment politics’. “They’ve learnt from their mistakes. They have already matured.”

Memon is no stranger to the label of the ‘establishment’. A former MNA from the Pakistan Muslim League-Quaid (PML-Q) – largely dubbed the ‘King’s Party’ – Memon shed the label when she resigned from the party and her National Assembly seat last June when the PML-Q joined the coalition government.

But even with the acrimony that exists between the PML-N and the PML-Q, itself a breakaway group of the PML-N, Memon says none of that has come up. “There have been no taunts. I have never been reminded of the PML-Q,” she says. “Big leaders have big hearts.”

After she left the PML-Q, Memon actively campaigned in Sindh with Ali Kazi, the head of KTN, for a ‘movement of change’ and addressed a rally in Bhitshah in January. She says it was a learning experience that led to her joining the PML-N. “A movement can’t challenge the status quo forces. The people of Sindh deserve more than promises.”

“I’ve been accused of shifting loyalties. I gave up an MNA seat to go to a party that is not ‘glitter gold’ and is not in the [federal] government. So how have I compromised?”

While Memon represents a brand of young, active politicians who have connected to voters traditionally ignored by most political parties, the PML-N’s stance on sectarianism and minorities remains a question mark for the party she has just joined.

Memon says PML-N is “committed to protecting minorities and sects,” and that has come through in their support for her work in the past ten days. She defended the party’s stance on sectarianism – “we have a clear cut policy on sectarianism. Gilgit Baltistan (GB) is an example – the PML-N in GB has a solution to sectarianism, that religious forces are encouraged to play a role in maintaining peace.” Additionally, she points to the PML-N’s commitment to Hazaras in protecting them from being persecuted in Balochistan.

Memon believes that the next election will be key for “young and women voters.”