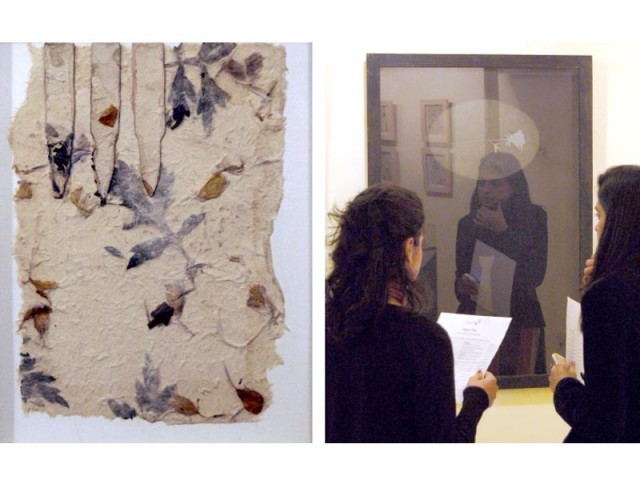 Experimentation and freedom of expression may be the only two distinguishing aspects of “Paper One”, a four-artist exhibit that opened at Khaas Art Gallery here on Tuesday.

The four exhibited artists, Asad Hayee, Ghulam Hussain, Hassan Mujtaba and Sheraz Faisal, aim to use paper as the primary source, instead of in its traditional role as a canvas upon which art can be painted, drawn, etched and sketched. Using paper as a medium of expression, the artists seek to enhance the importance of paper whether as handmade wasli or lined notebook paper.

The country’s reluctance to spotlight sexuality is highlighted in Hayee’s large portraits, which use black surfaces to individualise both genders with the universally acknowledged images of a tie for men and a rose for women. “I wanted to emphasise the individualism of each character,” states the artist adding that the needs and desires of both should be addressed.

Weaving used pages from school workbooks with plain paper, Hussain uses them to comment on the process of building societal structures. On one, a child’s hand scrawls out the majority’s religious beliefs suggesting indoctrination towards these from an early age.

Mujtaba, arguably the most experimental, challenges the interpretations of both English and Urdu playing with words from both languages using origami displayed in individual glass cases. The eye catching nature of the exhibit helps bring attention to each individual case that houses airplanes, boats and even shredded paper. Though the medium encompasses a wide range of shapes and objects, perhaps Mujtaba’s motivations behind using the simplest designs was to show the commonest use of an otherwise complex medium.

Faisal’s work contrasts against the work of his co-exhibiters and meshes together handmade wasli with pressed flowers and cut outs of bullets. At first, the bullets set in light wood frames seem almost ornamental but on closer inspection, the paper reflects bullet-shaped protrusions.

Commenting on the distinctive nature of each exhibit, the artists said that they approached the topic “in a unique way, exploring the tactility of paper and used its simplicity to our advantage”.

Perhaps due to the experimental nature of the exhibit, much of the art left viewers wondering whether the artists had tried a bit too hard to create something contemporary and edgy. Though the work of the four artists is out of the box, the absence of the artists themselves may have helped in diffusing the sense that much of the work was not very relatable.

As one viewer put it, “Even I could have done this!” But perhaps it is enough to say that in this particular case, beauty may very well lie in the eye of the beholder.

Tribute: Lost but not forgotten – Victims of 2011 Japanese earthquake remembered