'Forced conversion': Teen insists she converted of own free will

'Forced conversion': Teen insists she converted of own free will

Faryal (Rinkle) tells media she is a Muslim girl and has nothin­g to do with her parent­s; marrie­d of own free will.
By Sarfaraz Memon
Published: March 8, 2012
Tweet Email 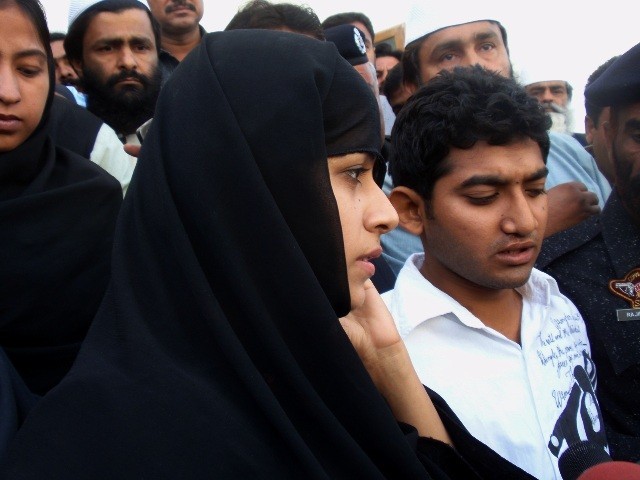 Faryal said that she had converted to Islam and had married Naveed Shah of her own free will, and that nobody had pressurised her into this. PHOTO: SARFARAZ MEMON

SUKKUR: Faryal Shah (Rinkle Kumari) appeared before the media on Thursday and made it clear that she had not been kidnapped and had not been forced to convert to Islam and marry Naveed Shah.

Faryal said that she had converted to Islam and had married Naveed Shah of her own free will, and that nobody had pressurised her into this. Reading out the Kalma-e-Tayyaba, Faryal said she was a Muslim girl and therefore had nothing to do with her parents.

Faryal (Rinkle Kumari) and her husband Naveed Shah were produced in front of the Sindh High Court (SHC) Sukkur bench on Thursday morning amid tight security.

The couple was escorted by SSP Ghotki Pir Mohammad Shah along with a heavy contingent of police. Pakistan Peoples Party (PPP) MNA Mian Abdul Haq of Bharchoondi Sharif, his son Mian Mohammad Aslam and a large number of their followers were also present.

The couple through their lawyer, Achar Gabole, had filed a constitutional petition stating that their lives were under threat from the relatives of the girl, who had been issuing threats of dire consequences.

Answering a question on threats to their lives, she said, “Our lives are under threat from my maternal uncle Raj Kumar”. She once again made it clear that she was a Muslim and wanted to live with her husband Naveed Shah.

Advocate Mohammad Murad Lund, who was representing Faryal’s grandfather Manohar Lal, told The Express Tribune that the single bench comprising of Justice Ahmed Ali Shaikh without recording the statement of the girl had ordered SSP Ghotki to provide protection to the couple and ensure that they are produced before the SHC chief justice in Karachi on March 12.

Advocate Mohammad Murad Lund kept on insisting that, the girl was under pressure due to the presence of a large number of Bharchoondi Sharif followers. He said everything will become “crystal clear” in Karachi, as the girl would be able to record her statement in a tension free atmosphere.

Mian Mohammad Aslam of Bharchoondi Sharif said that everyone had seen that Faryal was neither under pressure and had not said a word against the Pirs. “Rather she gave a statement against her own maternal uncle who is threatening to kill her.”

He said his father, PPP MNA Mian Abdul Haq had also come to the court because the girl’s parents had requested that they wanted to meet their daughter, but they didn’t come to see her.

Aslam said when the couple had come to Dargah Bharchoondi Sharif on February 24, Faryal had spoken to her parents on his instructions and had told them that she had come there to convert to Islam and marry Naveed Shah.

“I personally requested them to come over and meet their daughter to see for themselves that she was not under pressure, but they didn’t’ come,” Mian Aslam said.

He once again said that neither Islam nor the law of the land allowed forced conversion.