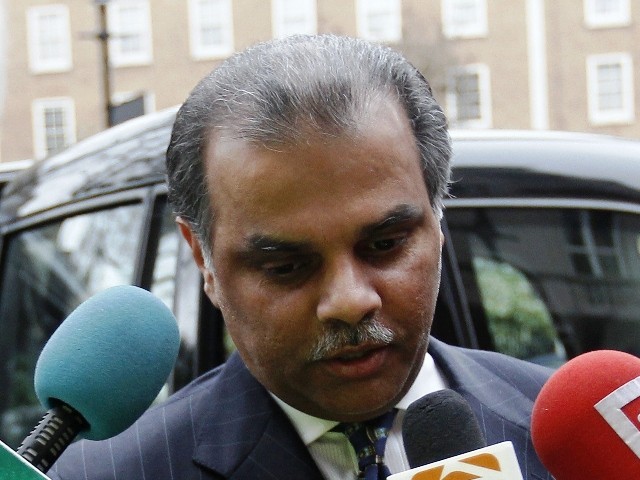 Former ambassador to the US Husain Haqqani had changed his Blackberry pin code twice, which resulted in the loss of some data record, Memogate protagonist Mansoor Ijaz said on Friday. PHOTO: REUTERS/FILE

LONDON/ISLAMABAD: The Judicial Commission probing the Memo issue on Friday directed Husain Haqqani to submit a response on the evidence provided against him and to provide the commission copies of bills of his cellular communication, along with his BlackBerry Pin codes,  in writing which he had used between March and November, 2011, by March 15.

Government of Pakistan and Haqqani were also ordered to produce the copies of mobile phone bills which were used by Haqqani during the period between March 2011 and November. The Commission also directed the GoP as well as Haqqani to provide detailed information in writing of his numbers which he used in that period, ownership of handsets, names of the service provider and all cell phones.

The commission also put Haqqani on notice through his counsel that his testimony would be recorded in Islamabad after the conclusion of Mansoor Ijaz’s examination.

However, the Attorney General told the commission that he would start cross examination of Mansoor’s testimony after Zahid Bokhari.

After the completion of testimony of all petitioners, except Zahid Bokhari, Justice Isa directed the Secretary Commission to contact the forensic expert companies based in United Kingdom, including LGC and System Technology consultants limited. The names of these companies had been suggested by Mustafa Ramady.

Justice Isa also asked the Attorney General for Pakistan, Molvi Anwarul Haq and other petitioners to suggest other forensic experts and to submit names before the commission within nine days.

It is pertinent to mention here that Zahid Hussain Bokhari, the counsel for Husain Haqqani will start cross examination of Mansoor’s testimony in the next hearing.

The hearing of the commission was adjourned till March 15.

Ijaz claims his data has not been tampered with

Former ambassador to the US Husain Haqqani had changed his Blackberry pin code twice, which resulted in the loss of some data record, Memogate protagonist Mansoor Ijaz said on Friday.

Express News reported that Pakistani-origin American businessman Ijaz was speaking via video link before the judicial commission that is probing the Memogate scandal.

On further questioning, however, Ijaz said he has no knowledge of how the record can be altered and only Blackberry manufacturer Research In Motion would know.

Answering questions of the Memogate commission, Ijaz said that the counsels would need to ask RIM how phone data could be tampered with. Though, in his reply, he hinted towards the possibility that pressure from security agencies of the US and some other countries may have forced RIM to tamper with the data.

Maintaining that his device remained free of tampering, he alleged that Husain Haqqani had changed his PIN code twice to deliberately lose stored conversations. However, he said that through the use of specialised software, this data could be recovered.

On hearing this, the head of the commission Justice Isa directed the Secretary of the Commission to alert the Forensic Commission to recover the specific BlackBerry handsets from which messages had been exchanged and verify whether these messages had not been tampered with.

Asked whether he received any money to create or deliver the alleged memo, Ijaz denied any such transaction.

He added that when he planned to come to Pakistan, he had telephonic and email-based conversations with DG ISI Lt. Gen Shuja Pasha.

Zardari ordered F-16s to stand down on May 2

Speaking to reporters before heading into the Pakistan High Commission in London to resume his testimony via video link, he claimed that as US helicopters crossed over into Pakistan without protocol, a telephone call was made from the Presidency to the country’s Army chief.

Ijaz said that the call was exchanged between President Asif Ali Zardari and Chief of Army Staff General Ashfaq Pervez Kayani. The President then ordered that PAF fighters, which had been scrambled, to not engage the Americans.

He added that there was a smear campaign underway in the media and that he would sue those behind him and that this lawsuit would be such that it would serve as a lesson.