Aquila dredge­s up memori­es of her trauma­tic past in order to shine light on lesser-known atroci­ties of confli­ct.
Sunday Magazine Feature
By Batool Zehra
Published: February 26, 2012
Tweet Email 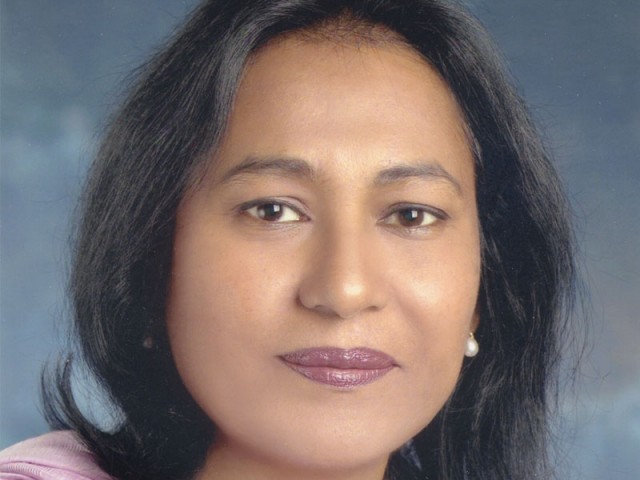 History is always written by the victors, and in the case of the 1971 war, the dominant narrative has been that of atrocities committed against the Bengali population. But in her upcoming novel, Of Martyrs and Marigolds, Aquila Ismail dredges up the memories of her traumatic past in order to shine a light on the lesser-known atrocities of that conflict.

History is always written by the victors, and in the case of the 1971 war, the dominant narrative has been that of atrocities committed against the Bengali population. But in her upcoming novel, Of Martyrs and Marigolds, Aquila Ismail dredges up the memories of her traumatic past in order to shine a light on the lesser-known atrocities of that conflict.

“My mother forgot how to speak Bengali after the trauma of 1971. It just went out of her head. She cannot speak it to this day,” says Aquila Ismail, as we sip tea in her sitting room on a winter’s evening in Karachi. One of the few Biharis who managed to flee Bangladesh after what is known in that country as the War of Liberation, Aquila now lives in the UAE. But over 250,000 of her fellow Biharis still live in squalid conditions in Bangladesh today, as a stateless minority.

While the atrocities of the Pakistan Army against the Bengali population during the war are well-documented, little is known about the plight of the Biharis who were left stranded when East Pakistan seceded in 1972, and what they suffered during and after the conflict. According to some estimates, 750,000 Biharis were left in Bangladesh in 1972, and not only did they face persecution at the hands of Bengalis, they were also disowned by Pakistan and became stateless overnight — in December 1971, while Pakistani army personnel and civilians were evacuated from Bangladesh, the Biharis were left behind.

But curiously, little has been written about the persecution faced by the Biharis. That is now changing. Last year, Sharmila Bose’s Dead Reckoning generated controversy for suggesting that Bengalis were not just passive victims, but committed “appalling atrocities” in the war for their liberation. Ruby Zaman’s novel Invisible Lines with its half-Bihari heroine also brought out hitherto unrecognised dimensions of the conflict. This year, Aquila Ismail comes out with her Of Martyrs and Marigolds, a fictionalised account of the conflict, based on her own experiences.

Aquila, who grew up in East Pakistan, and is fluent in Urdu, Bengali and English, remembers a time when there were no distinctions between herself and her Bengali friends. “There was no division between the Bengalis and us. All my friends were Bengali. We never felt a difference — till 1968,” she says.

That, of course, was the year that Ayub Khan initiated the Agartala Conspiracy case against Sheikh Mujeebur Rehman — the leader of the Awami League — accusing him of conspiring to secede from Pakistan.

But this sense of oneness with her Bengali compatriots was about to change. In 1970, Aquila applied for admission at Dhaka University. Given an option between Urdu and Bengali as a vernacular subject in Intermediate, she had opted to learn Urdu since Bengali was already such an essential part of her life. Placed on the Honours list, Aquila should have been a shoo-in for admission. But to her dismay, her name didn’t show up on the list. When the family tried to find out what went wrong, they were told that since Aquila had opted to take Urdu, “she couldn’t be from here”. The problem was resolved when her father got an affidavit saying she was indeed born in East Pakistan, but a line had been crossed. “Everything was smoothed over but we began to feel that we were being singled out,” she says.

Still, at the time of the 1970 elections, Aquila’s family voted for the Awami League. The results of that election, of course, changed the course of history. Sheikh Mujeeb’s Awami League won a sweeping victory. Meanwhile Bhutto, who had won a majority in West Pakistan, began to delay the formation of the National Assembly with the support of the West Pakistani establishment. Jubilance turned into suspicion in the Eastern wing, finally leading to a mass uprising.

On March 1, 1971, Yahya Khan announced the postponement of the assembly session. Two days later, Aquila witnessed the strange spectacle of the flag of Bangladesh being raised in her university. She also saw armed young men on the streets — Bengali civilians who now comprised the Mukti Bahini, the resistance force against West Pakistan. Meanwhile, on March 25, the Pakistan Army conducted a crackdown on Aquila’s university. She remembers seeing the orange flames rising up late in the night, even though her house was 10 km away. “It was as if an enemy invasion was taking place,” she recalls. “A full-blown military assault with tanks, machine guns, grenades.”

The university had been closed down when the curfew was imposed and the students’ hostels and teachers’ accommodations were sparsely occupied. Knowing this, Aquila was shocked to hear claims that 10,000 people had been killed in the operation. A week later, when she went to university, she found out that at least four to five people she had known were slain. The list put up in the university had 149 names in all.  “An army assault had taken place — this much is true. But 10,000 people were not killed — 10,000 is a huge figure. The myth starts from there. There must have been about 200-250 dead in all, from my estimation.”

In the mayhem that lasted from March 25 to April 10, when the Pakistan Army took control, a large number of Urdu speakers were also massacred by the Mukti Bahini. This is when it began to dawn on Aquila’s family that they were not safe in the land they called home. “Nobody was going to ask me who I voted for, it was just enough that I was Urdu-speaking,” she recalls.

The Biharis had become symbols of West Pakistan’s dominance and were attacked in retaliation to the army’s suppression. It was not just Urdu speakers who were in danger, says Aquila. “Bihari was a loose term used for people who came from Uttar Pradesh, Poona, Maharshtra, for Punjabis, Pathans. Every non-Bengali was a Bihari.”

Despite the killings and hatred, Aquila’s family continued to identify with the Bengali cause. “We hated the army for what it had done. You don’t do this to your own people. They’re not the enemy.”

When Dhaka fell into the hands of the rebels on December 16, 1971, Aquila’s family assumed that they’d be presented a choice much like they’d been given in 1947: to live in Bangladesh or to go to what was left of Pakistan. But that illusion was quickly dispelled. Non-Bengalis were attacked, branded collaborators, and shot, bludgeoned and bayoneted to death. The Indian troops had been protecting non-Bengalis during the conflict, but as they withdrew, the pogrom began in earnest.

Aquila’s family was forced out of their home on February 4. “That was the day that we lost everything … we didn’t even have a country. We were taken on a bus through the same route that I used every day to go to university but it was strange because I didn’t belong anymore. At that time I didn’t feel so much pain because my mind sort of shut down.”

Aquila, her mother and her sister were taken to a camp by steamer, while her father and brother were put in jail. At the refugee camp they were given burnt khichri to eat and didn’t even know where the men were. “The camp organisers would point to us and tell western reporters that we were women who had been raped by the Pakistan Army.”

It was months before Aquila’s family was able to leave the camp and make it back safely to Pakistan — and then only because they had friends in high places. But once they made it to Pakistan, Aquila found that the press wasn’t necessarily interested in knowing about their plight. “I actually contacted Dawn to write about this and they did not even want to talk about it. They only wanted to talk about what the Pakistan Army had done. They weren’t even willing to examine the role of the PPP in all of this.”

When the family landed in Karachi, Aquila’s mother had Rs10 in her purse. Since her father was a civil servant, they were able to re-establish themselves, but even today Orangi Town in Karachi is filled with Bihari survivors who weren’t able to rehabilitate as quickly. In fact, the very title ‘Bihari’ is used to discriminate against these people. “Why are those who came from East Punjab called Pakistanis while we are known as ‘Biharis’?” she asks.

Finally, in 2008, Aquila sat down to write the other side of the story. Not the story of the winning side, but of those who suffered and were abandoned. “There have been lies after lies after lies as far as treatment of Biharis is concerned. I think the record should be put straight.”

The result is Of Martyrs and Marigolds, due to be published in February. “I thought it should be a novel because fiction is able to take care of the complexities of conflict, the shades of grey that history does not take into account.”

Writing the book proved to be an unexpectedly painful process. “They say that when you write, it brings closure, but it actually made it worse. There were so many things that I’d forgotten which came back to me when I started writing. You start thinking: this really happened to me and that’s a pretty strange feeling,” says the writer.

Despite all the years, and all the pain, it seems Aquila still has a soft spot for her lost homeland.

“I’m very sympathetic to the Bengali cause, she says. “They deserved to get Bangladesh for what (West) Pakistan used to do to them. It’s not what one does to one’s own countrymen — you have to give political power to the majority in a democracy.”

There are no heroes in Aquila’s life story. While the Mukti Bahini were to blame for the massacre of her fellow Biharis, she also heaps blame on the army and West Pakistani establishment. “The Punjabi bureaucracy used to call them ‘bhookay Bengali’, ridiculing them for being short and dark,” she says.

Meanwhile, it is the Bihari population which has borne the fallout of the conflict. Many Biharis are stranded in refugee camps to this day. “These are 2nd generation, 3rd generation refugees,” says Aquila. “They are stateless … we paid the price for supporting Pakistan.”