Intimacy in Karachi: The twelve pleasures of Hanif Kureishi

Intimacy in Karachi: The twelve pleasures of Hanif Kureishi

Kureis­hi seems to have spent his whole workin­g life traili­ng the effect of our own pleasu­re on other people.
Sunday Magazine Feature
By Imran Yusuf
Published: February 26, 2012
Tweet Email 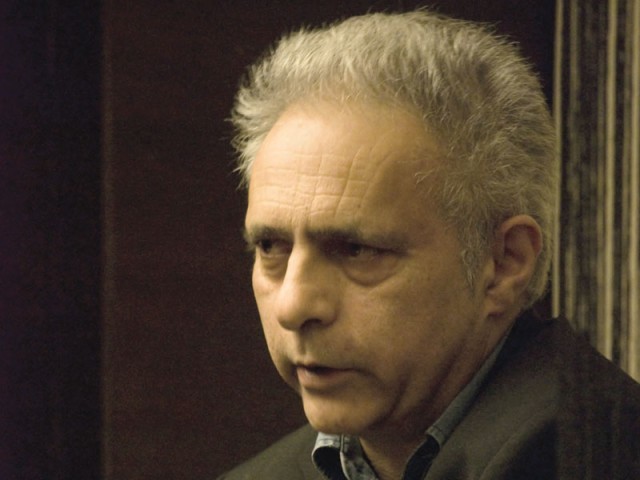 Kureishi says his fiction-reading days are behind him.

The pleasure principle runs through Hanif Kureishi’s body of work like a fractured spine. Characters in his stories pursue pleasure to its bleakest ends; it is the purpose of all adventure; it gets them into trouble; it is the only consolation.

The British writer, who visited Pakistan for the Karachi Literature Festival, seems to have spent his whole working life trailing the effect of our own pleasure on other people, charting its agency in self-discovery and agonising over how much pleasure is too much pleasure.

Kureshi was already sipping a drink when I met him in the Avari Hotel’s business centre on his last night in town. The cityscape lit up the windows. He spoke with a generosity of spirit and the nimbleness of a man with a plane to catch. Watching him project his brand of articulate cool from a white leather sofa, it struck me that here, tonight, this business centre is transformed: it is the closest Karachi gets to a bar.

Fifteen minutes into our conversation, the photographer arrived. Kureishi half-jokingly asked the British Council aide if he looked alright, then turned to me and said: “That’s all that remains as the years go by: vanity … and jealousy.”

He is working on a screenplay, a few essays and a novel about an old Indian writer living in the British countryside. The themes? “Ageing, women and class. And writing.”

Even so, there are times when nothing comes. What gets him going on a slow day in the study? Does he reach for one of his old favourites from the bookshelf? Graham Greene? Proust? Baldwin?

Kureishi says his fiction-reading days are behind him. That was his adolescence, his twenties and thirties: long afternoons of serious reading on the sofa. These days he prefers history, politics and most of all psychology. Time is running out; understanding appears as far away as ever.

Why have you had such an effect on particular types of Karachiite (from what I can tell, the well-off bluestockings and mirthful homosexuals)? He played dumb. I told him I’d heard things I couldn’t repeat. “Oh go on, tell me all about it.” Women, even the dour type, the kind who have taught literature to three generations of Karachiites, had wanted to jump him all weekend. “That’s so great. Lovely to hear.” Is it the way he writes about women and desire? “I can’t say … I can’t elaborate on my charms, I can’t do that.”

But he can say that “writers like women.” And women like writers. Judging by his old pal Rushdie, looks are secondary: “Salman, look at him, he gets loads of women.”

How’s this for irony: while Karachi’s literary groupies were lusting after Kureishi on Saturday early evening, he was sprawled out on his hotel room bed, alone with a bottle of beer, watching Manchester United versus Liverpool on TV. “Oh, it’s great here, you get ESPN, Star Sports, you get everything.”

He says Karachi is “a fascinating place” but it resembles New York in the 1970s. After a while, he’d feel compelled to “just walk about.” His family would try to stop him: “My cousins, who were born and brought up here, were telling me, ‘we don’t go here, we don’t go there, especially at this time’ … it’s a real shame.”

“What’s really great about cities is multiculturalism … but everyone in Karachi is a Pakistani … that’s not the way the world’s going, the world’s becoming more and more mixed up.”

I told him, defensively, that Karachi was an ethnically diverse city. He talked about culture. “Places which are monocultural have far less energy.” Karachi has energy, but it isn’t his kind. Kureishi is post-Freudian; he has no time for gang warfare; there’s more than enough conflict for him at the kitchen table.

He writes fondly — and honestly — of parenthood. Does he want to show his boys Karachi and Bombay one day, to give them a sense of their father’s roots? He smiles. “I kept thinking, driving around town in the car with the driver and the security guard with his AK-47, I wish my boys could see this … but their mothers won’t allow them to come.”

Music streams through the pages of his fiction. He even edited The Faber Book of Pop. Does he still like music? “I like white indie music. The Killers, The Arctic Monkeys.” What about gangsta rap? “Oh no … what’s that new thing? Grime? My boys love it, I keep telling them that ‘this music is for white middle-class private-school boys like you, it’s expressly designed for you.’ It gives me a headache.”

Kureishi loves to laugh. More than this, he loves to make others laugh. Sometimes his jokes make the point quicker and better than a thousand-word essay. Other times they are a deflection; you want him to plunge through the surface but he refuses. It depends on his mood and whether you can spin a familiar subject to interest him sufficiently.

He is still sufficiently interested in politics and was impressed by the level of discourse in Pakistan. “Conversation is much more frivolous in London.” I asked him if he felt a perverse sense of envy here: words matter so much you can get killed for them; politics is more urgent; life is heightened. “I would have before the fatwa. That changed things.”

Rushdie came up a lot this weekend. At his first session at the literature festival, Kureishi called him “the most important writer in the world.” By the time of his closing speech, there was no more Salman and nothing negative about Pakistan. “Yeah, that was my Nelson Mandela moment. I decided not to say anything frivolous or mention Rushdie.”

One wishes he had. For all the talent of the current stars of Pakistani literature in English, how many of them would take on the very basis of the state of Pakistan. “Why would you want a society where everyone is the same?” Kureishi asked. And I had no answer.

A word on his voice. It is unique among British writers. It is not the boxer’s rat-a-tat of Tony Parsons or the posh drawl of Martin Amis. It has something extra, it has traces of all his origins and interests: clipped in some places, stretched out in others. There is the Bromley street, a history of violence; there are melodious feminine tones which verge on the aristocratic; there is something from his father, from all our fathers who were immigrants in Britain in the ‘70s. It is a modern British voice — it is a pleasure to hear.

I let him know that I was a London boy from the suburbs.

His questions sliced to the heart of me: he wanted a form, a structure to the person sitting opposite, a narrative he could work with. He thought it bizarre and fascinating that someone from London could make a life in this city he found interesting but was happy to leave. As I told him of my love and hate for the city, he said the only hope for me was to write a novel.

Literature: still the greatest pleasure in the life of Hanif Kureishi.