Aabpar­a besieg­ed, citize­ns in the vicini­ty irked; school­childr­en at the rally did not know what they were doing there.
By Obaid Abbasi / Sehrish Wasif
Published: February 21, 2012
Tweet Email 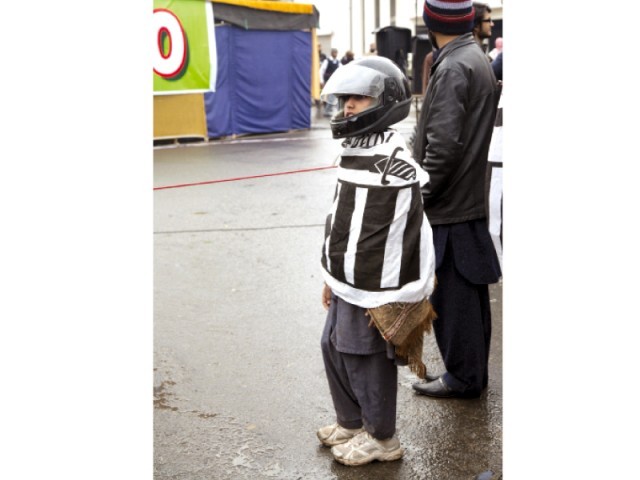 A woman carries her child in search of an operational bus stop (left) while children played with toy guns (centre) and dressed up like the dead (right). PHOTOS: MUHAMMAD JAVAID, MYRA IQBAL, EXPRESS

A ‘dharna’ (sit-in) under the pretext of ‘Difa-e-Pakistan’ (defending Pakistan) only served to harm the economic interests of small traders in Aabpara and other parts of the city. Monday brought headaches for businesses and citizens alike, as some shops near the protest site stayed closed all day, others complained of low customer traffic, banks and petrol pumps were blocked off with canvas screens, and commuters were seen stranded at bus stops.

Thousand of participants from different religious parties and banned outfits gathered under the Difa-e-Pakistan Council (DPC) umbrella to assemble at Aabpara Chowk at around 1:30pm. However, the Islamabad administration had sealed all roads leading to Aabpara early in the morning, leaving hundreds of commuters fuming.

The blocked roads included the main access points for Aabpara Chowk, Khyaban-e-Suhrawardy and Municipal Road, with numerous detours created for ‘smooth’ traffic flow. Public transport users had it the worst, as they had to walk in the rain.

“I don’t understand why Aabpara Chowk is always used for protests and rallies despite other large grounds available in the federal capital,” said Hafza Azam, as she waited for a wagon on Kashmir Highway.

Sadia Bibi and her four-year-old son had to walk more than three kilometres from Aabpara Chowk to the bus stop near Serena Hotel. “I took my son to Pakistan Institute of Medical Sciences (Pims) for a check up, and after getting to Aabpara Chowk, I had to go to this stop on foot due to the blockade,” she complained.

Members of the traders’ union had showed resistance on Saturday and decided not to allow the sit-in.

However after meeting with Jamat-i-Islami (JI) Islamabad chapter president and former MNA Mian Aslam they allowed the protest on condition that this protest would be the last one.

Talking to The Express Tribune, traders leader Ajmal Baloch claimed it was the last protest at Aabpara Chowk and that his union will not allow any protests at the site in future. He said that the union is also planning to approach Islamabad High Court (IHC) to get remedy in this regard. “For years, this chowk has been used for protest and rallies which badly affect our business,” he added.

“We bunked school for this?”

A number of very young protesters were seen in the crowd, however, not many of them knew why they were there, or what they were rallying for or against.

Museeb and Saddam did not know each other but were sitting together and sharing a big shawl to protect them from the rain.

Saddam, a 6th grader, came alone from Rawalpindi to attend the rally, which he thought was held “to destroy America”. However, when asked if he knew anything about America, or had any reason for wanting to destroy the country, he said no. Little Museeb had been forced to come along by his father.

Uniform-clad third-grader Usama was the centre of attraction for many as he waved a big flag near the stage. “I have come here with my father, but I don’t know what this rally is about,” he said.

Nasir, a fouth grader from Haripur, had come with his teacher. He had to miss school for a rally he knew nothing about.  “My teacher told me that we are going to Islamabad and you should also join us. I don’t know much about America, except that ‘goras’ (white people) live there.”

Mohammad Shakir from Alipur Chatta and was sitting on a wall with his relatives and was trying to listen to the protestors’ speech.

He had to miss his school to come here.

“My father brought me here therefore I took leave from my school. But do not know what it is all about,” he said.

Atif, a third grader, was carrying a huge flag bearing the Pakistan cricket team logo. “After school, I came here with my elder brother and his friends. They said that they were going to Islamabad and gave me this flag,” he said. When asked why he was carrying this particular flag, he misidentified it as the national flag, based on having seen PTI chief and former captain Imran Khan carrying it on TV during an old cricket match.

Madrassa student Huzaifa, 12, caught the eye of many as he stood close to the stage wearing a helmet and using a Jamatud Dawa flag as a shroud. His aim in life is to become a ‘mujahid’ (religious warrior).

He too thought the rally was intended to challenge America. However, his explanation of who America is showed much is lacking in Madrassa education. “America is the country that has occupied Kashmir and is killing people there,” he asserted.