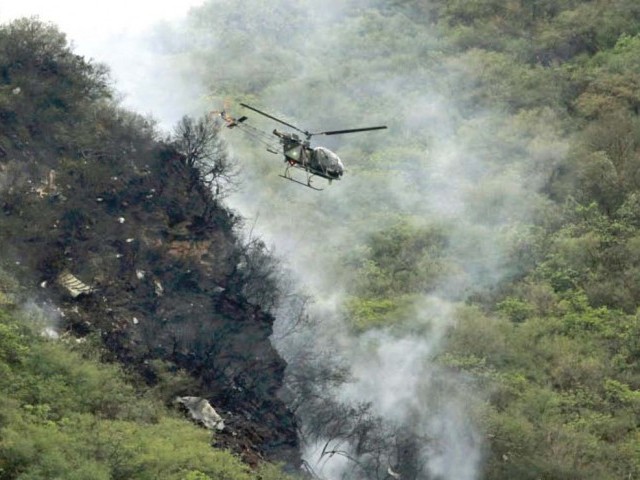 A helicopter hovers over the smoking wreckage on the day the passenger jet crashed into the Margalla Hills. Photo: REUTERS

Of the 152 victims, officials said 102 bodies had so far been handed over to the relatives for burial. However, over 80 coffins are still lying in cold storage as many relatives have not shown up at the DNA collection centre. Only 52 people have given their samples so far, officials said.

Workers of the Capital Development Authority’s  fire and rescue service and volunteers worked to remove the wreckage of the plane. They sent the body parts to the Pakistan Institute of Medical Sciences (Pims) for an autopsy.

After the autopsy and collection of samples for the DNA tests, the bodies will be sent to the cold storage located on Chambeli road in sector I-10. The samples have been sent to the Kahuta Research Laboratories (KRL) hospital for tests and results are expected in seven days. Hospital officials said tissues samples taken from the bodies are complicated, which has caused the delay.

“The black box will be separately sent to France,” another CAA official said.

A team of French experts accompanied by some officials of Airblue also visited the site. They analysed the available evidence from the scene to ascertain the losses and determine the insurance claims for the airline.

Some officials of the CAA have demanded that the inquiry of the crash be conducted by independent experts. They fear that if Airbus is held responsible, the company might try to manipulate its findings.

On the other hand, the control tower is handled by the Pakistan Air Force and its officials might also try to influence investigations, they said. However, they added that the seven-member investigation team is competent to conduct the inquiries.

Since the black box is in good condition, the prospects for an efficient investigation have increased.