The Silent Minority: ‘Only Muslims and men can live in this country’

The Silent Minority: ‘Only Muslims and men can live in this country’

Khaled Ahmed attemp­ted to identi­fy, as best as he could in a five-minute slot, minori­ties in Pakist­an.
By Shayan Naveed
Published: February 13, 2012
Tweet Email 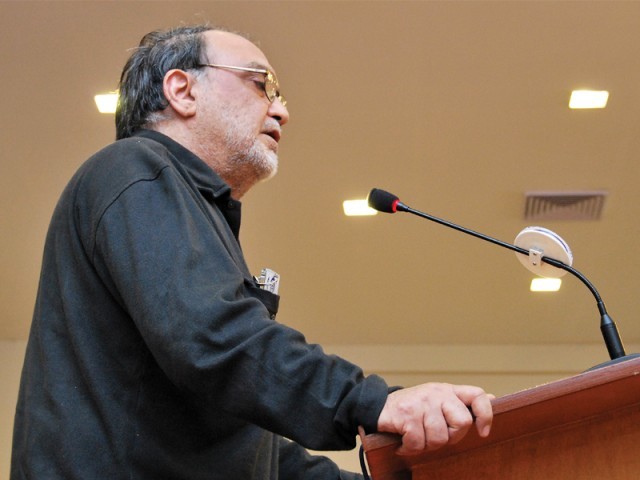 Political analyst Khaled Ahmed attempted to identify, as best as he could in a five-minute slot, minorities in Pakistan. PHOTO: ARIF SOOMRO/EXPRESS

It started late, rushed to resolve and concluded with dismay. Indeed, the amount of interest displayed in the session on ‘The Silent Minority: A voice for the voiceless’ at the second day of the Karachi Literature, unfortunately reflected reality in Pakistan.

While the issue is one of immense significance, the priority given to it, seemed, was abysmal, much to the annoyance of the audience; and perhaps even the panelists – one of them even going as far as to say that he had no idea why he was there. While the sessions for Vikram Seth, Saad Haroon and Sharmeen Obaid were packed, the one for the silent minority was shamefully bare.

Political analyst Khaled Ahmed attempted to identify, as best as he could in a five-minute slot, minorities in Pakistan – explaining the constitutional history of “cornering” certain communities into a “white patch” on the national flag.

“I believe the white patch is becoming more and more apparent as a mistake,” Ahmed said, before suggesting that the ruling community should not intensify its identity. “Because of the intensification of Muslim identity under the blasphemy law, the Christian community is being very clearly targeted.”

Ahmed concluded with perhaps his most interesting point: “Women are a minority in Pakistan, in terms of the state excluding them.” However, he did not, or rather could not, elaborate.

Another panelist, the editor of German publication Fikrun wa Fann, Stefan Weidner’s rigidness could be forgiven for what he said was out of nervousness.

Nevertheless, Weidner went straight to the point, disagreeing with the title of the session. “We are faced with a silent majority, not minority. The minority speaks up.”

He added that the metaphor “voice for the voiceless” is a dangerous one, because, he simply said, it does not work that way. “It’s rather pretentious,” he added. Although the 5% Muslim population in Germany has a voice of its own, it still subject to “racism”. He was quick to add that he wouldn’t lend a voice to them (the minorities) and would rather try and make the “original” Germans reflect on their “racist discourse”.

While his brief speech received no reaction from the largely confused audience, the moderator of the session, Abbas Rashid, said: “I don’t think the intent was to appropriate the role of giving a voice; [it was] rather to create an enabling environment for them to contribute.”

Struggling to maintain coherence, the second speaker, linguist and scholar Tariq Rahman, discussed the existence of ‘linguistic minorities’ in the country and how the ruling communities and the elite have always had a different language. There may be a numerically large number of disempowered people, but “it’s not a number game, it’s a power game”.

It wasn’t until the Q&A session that substantive issues were discussed. One audience member suggested that instead of holding talks and essentially preaching to the choir, the authorities or a think-tank should be briefed instead.

However, the suggestion was shot-down, with Ahmed and Rahman both stating that think-tanks have external influence and “are undermined by the intelligence agencies”.

Khaled Ahmed particularly reacted, and achieved a few rounds of applause, when grilled over the exclusion of a member of a minority in the panel. Giving a few examples of his Ahmadi friends, Ahmed said that there was no question about the participation of members of minority communities in the session. “Ahmadis have said goodbye to their country,” Ahmed said. They would simply refuse to be targeted, he said, adding that while that is a right he has to respect, he will “continue to speak for them whenever he can”.

The moderator aimed to give a neutral conclusion to the session which had only started getting warmer: “Another world is possible only when you make it [possible]. There are examples of states coming out of the brink, but this [Pakistan] is a tough one, make no mistake of that.”

But what best captured the hopelessness of the situation was that one line by Ahmed, which did not need to be elaborated this time: “Only Muslims and men can live in this country.”