A conversation with Shobhaa De: At 64, Shobhaa De is still going full steam

A conversation with Shobhaa De: At 64, Shobhaa De is still going full steam 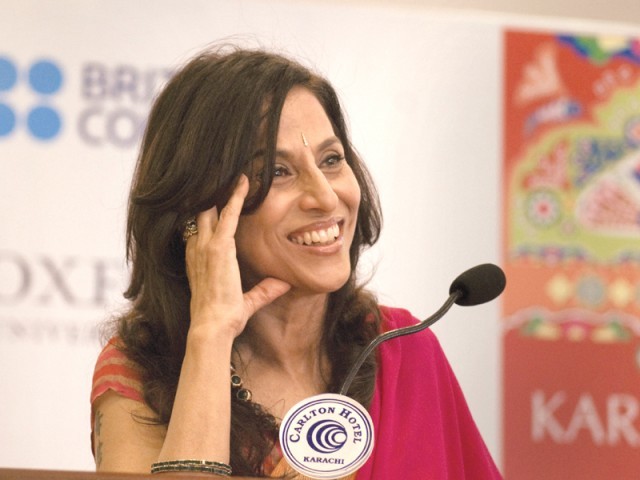 The writer's disdain for prescribed gender roles was highlighted in her talk. PHOTO: AYESHA MIR/EXPRESS

For someone with a phobia of needles, Shobhaa De is remarkably comfortable poking others with her razor sharp words regardless of how uncomfortable it may make them.

“Last week, I was at a dinner, when a minister seated at my table said snidely ‘she writes very critically about me and attacks me on TV’. And I turned to him with a smile and said ‘you’re very lucky it is only occasionally’,” said De, while speaking at the Karachi Literature Festival, which kicked off on Saturday.

“He told the host he had a stomach ache and was gone within five minutes,” she continued, wittingly.

Possibly the most glamorous 64-year-old on both sides of the border, De didn’t disappoint to live up to her ‘Superstar writer’ title.

De is primarily known as a gossip columnist, despite having worked on 17 novels – her 25-year-old Socialite Evenings now a Penguin classic – and appearing as a panellist on many television shows about women in India.

This is, perhaps, because of her unapologetic stand on refusing to weave a narrative from the perspective of a victim – a role that most women writers in the subcontinent have taken upon themselves.

“Women are meant to write about suppression, depression, oppression and repression; I understand, but that’s not my life. I don’t want to glorify suffering or make women martyrs and victims in our society,” she explained. And she was honest about it: “It would be hypocritical.”

Almost wishfully, she added, “It would be so much more pleasant if we could do away with the filter of gender.”

De also questioned why women have to be referred to by their gender before their profession. “I am against this categorisation. You don’t say male doctor, male writer, male sportsperson, then why woman writer? As a publisher myself today, I protest against tags like Chicklit, which are meant to communicate that ‘oh, we don’t take it seriously; we enjoy it and then chuck it away’.”

De’s disdain for all prescribed roles is underlined in her latest book, Shobhaa At Sixty.

Like most of her other books, her photograph is splashed on her latest book’s cover. This time, however, it is from a photo shoot she did for Vogue magazine when she turned 60.

Her publishers, almost expectedly, wanted the usual bindi and sandoor as the cover.

“In our society, a woman is cast aside once her childbearing days are over. Once a grandmother, your role is to babysit your grandchildren, while others travel around the world. I have six children and I am a grandmother. But my cover breaks the image of what a 60-year-old should look like.”

But while she speaks openly and candidly against being catergorised, she appears most comfortable in her role as a mother, in every way that society defines it.

Responding to a question by a woman in the audience who said her life plans are on hold while her two-and-a-half year old son takes up all her time, De said, “A two-and-a-half-year old son is a tyrant. Forget about doing anything else until he grows up.”

But, she was careful to add that a woman must not put her life on hold. “I believe all women are essentially born jugglers, we are built to multitask without any song and dance.”

As the session drew to a close, it became apparent that the audience did not want to let her go.

The last question, not surprisingly, was what to expect in her next book.

“It is about an oily, sleazy, despicable politician in Delhi,” she said, adding almost incorrigibly: “I want my future novels to be even raunchier than the old ones.”