On the first day of KLF, “the rockst­ar of Pakist­ani litera­ture” faced a hall packed with fans.
By Batool Zehra
Published: February 12, 2012
Tweet Email 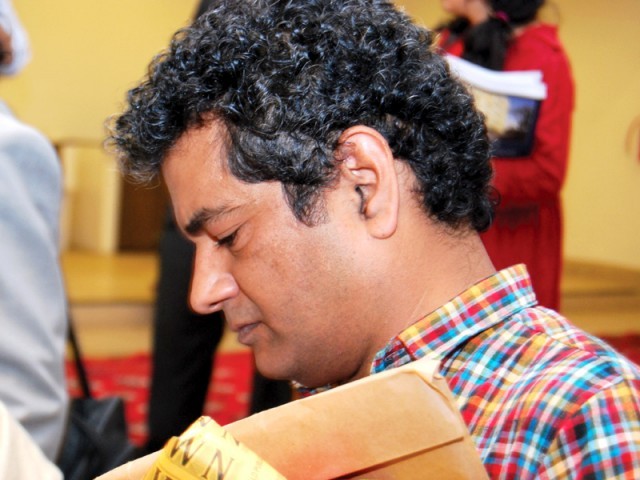 Our Lady of Alice Bhatti may be Mohammed Hanif’s latest novel, but A Case of Exploding Mangoes is still what gets him all the attention. On the first day of the third annual Karachi Literature Festival on Saturday, “the rockstar of Pakistani literature” as moderator Bina Shah described him, faced a hall packed with fans, hanging on to every word of his witty, self-deprecating humour.

But in the question-and-answer session, a flustered woman flatly dismissed Alice Bhatti and implored him to go back to the style of his first book. “I think A Case of Exploding Mangoes was so close to the truth,” she cried. “My copy is in tatters now because ten of my friends borrowed it. No one wanted to borrow Alice Bhatti!”

So, despite the reading from Alice Bhatti’s Chapter 10, which included, of course, that famous line – “Love, he concludes, is a runaway charya,” the conversation inevitably veered to Hanif’s first book, and the delicious possibility of him facing death threats and being hunted down by bloodthirsty ISI goons. “Stop giving people ideas. Mein ne aap ka kya bigara hai,” he begged one avid questioner, imploring that he didn’t deserve this as he had never harmed them.

There is one anecdote that Hanif is particularly fond of narrating. After the publication of A Case of Exploding Mangoes, the emphatically fictional novel that details an imaginary General Zia’s death, he says he was approached by a director of the ISI, Pakistan’s fearsome spy agency. “My son you’ve written a brilliant book,” he said. “Now tell me, who told you all of this.”

Hanif felt, at that point, incredulity but also a healthy amount of alarm, at the powers running the affairs of state. He also recalls the times that General Zia’s son messaged him, saying: “Mein dekhta meray walid zinda hotay tou tum kaisay likhtay.” We would have seen how you would have managed to get that book out had my father been alive.

“Mein nai likhta,” he told the audience, with a shrug. He simply wouldn’t have written it.

Still, even ardent fans sometimes retain the impression that the book is at least partially based on fact. “Did you interview someone from General Zia’s family when writing this book?” asked one not-too-bright reader. “That would be cruel, no? To interview someone’s family to make fun of him?” replied Hanif, who may well feel that the process of fielding questions is as “hopeless, silly, chaotic” as he described the process of writing to be.

One of the best loved Pakistani writers in English (yes, and there are three), Hanif was thoroughly grilled on his inspiration, writing process and research method by the members of the audience. “Some of the best research I’ve done is sit in front of a blank wall for hours,” he said while lamenting distractions in the form of the television, the internet and the refrigerator. “The art of writing a novel is the art of keeping your ass in a chair,” he added ruefully. Hanif has managed to keep his “ass” stuck to a chair for a very long time to produce his two books. For someone who thinks in terms of images and voices, not plots and stories, Hanif describes the process of writing as a solitary and chaotic one: “It is a hopeless process and you have to be hopelessly obsessed about it. If you’re interested in doing something else, you’ll be bored with it. Even if you’re not interested in something else, you’ll be bored with it at times. You’ll read your first draft and think: why should anybody care? Why is it so bad? Why are the characters the way they are.”

One imagines it’s quite all right for the writer to be bored, as long as the readers are not, which indeed seems to be the case with Hanif’s exploding mangoes.