Positive Pakistani: The network of junk

Positive Pakistani: The network of junk

Unleas­h your inner enviro­nmenta­list and do a world of good!
Sunday Magazine Feature
By Sumaiya Lakhani
Published: January 29, 2012
Tweet Email 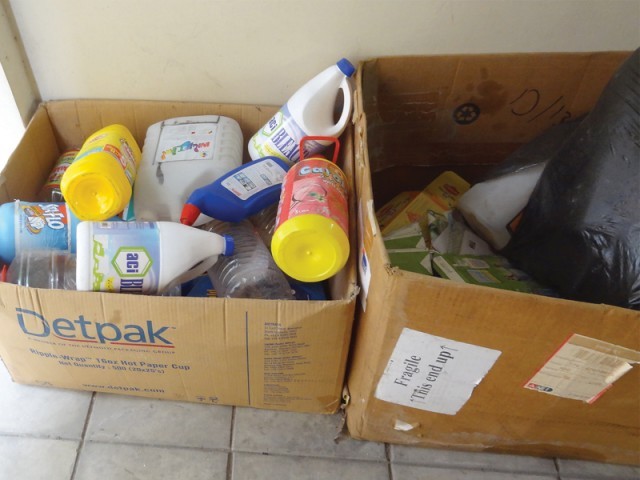 Unleash your inner environmentalist and do a world of good!

I stood at the end of a long queue at the grocery store, shuffling impatiently and silently wondering if the bottle of shampoo in my hand was actually worth the wait.  After the sales clerk finally rang up my purchase, he reached for a plastic bag. I shook my head, indicating there was no need and shoved the bottle in my handbag instead. When I turned around, I saw a woman in the adjacent line asking the salesman for extra plastic bags, and the word ‘non-biodegradable’ started ringing in my head.

Incidents such as this may often leave your inner environmentalist feeling disheartened for not being able to do much more than limiting the waste that you yourself generate. But thank your lucky stars that not everyone is sitting on the sidelines with you … some people are actually out there, doing what they can to preserve the environment.

One of these green do-gooders is Shirin Halai who recently initiated a campaign to reuse, reduce and recycle.

What started merely as a personal project elicited such an overwhelming response from her family and friends that now, just five months since she started, she has over 50 people on board — along with cafes, beauty parlours, schools and other companies — who send her all their recyclable items. These include paper, boxes, bottles, tins … pretty much everything you can think of.

Stacks of newspapers, bottles, scrap paper and tins lying in her front yard bear witness to the amount of stuff that can actually be re-used.  One of the companies she works with also donates huge bags made of recycled material to make it easier for people to bring in their stuff next time round. “People using plastic bags to bring in recyclable items would just ruin the purpose of the whole thing,” says Shirin with a smile, as she shows me the material that the ‘green’ bags are made of.

How exactly does this network of junk operate? Mostly through text messages, it seems. As Shirin scrolls through her inbox, I take a peek. There are dozens of messages from her ‘junk suppliers’ discussing logistics and, at times, simply commending her for her efforts. Her entire marketing strategy consist of distributing flyers, but the network mostly thrives on publicity and awareness spread through word of mouth.

Once the junk suppliers have dropped off their recyclable garbage at her house, Shirin separates the items she receives into different categories with the help of her household staff, and sells them all to kabarees. The proceeds are then given to charity. Two birds with one stone? All it takes is a little bit of creativity and a lot of determination. Recipients of her charity have included The Garage School and the Burhan Blood Bank and she hopes to soon be able to donate hearing aids to the Anjuman Behbood-e-Samat-e-Atfal, a school and vocational center for the hearing impaired, as well. Funny what scrap paper and tin cans do when put to good use!

Shirin believes that ‘every scrap of paper can be recycled’ and after an hour of chatting with her, I am convinced. Unused paper and textbooks can be put to good use in charity schools and Shirin saves everything from receipts and tissue boxes to brochures and medicine bottles and boxes. “It’s a way of life we have to adopt,” she adds, explaining earnestly that it is necessary to prevent further destruction of the environment.

When asked what prompted her to start such a set-up, she claims that she had always been a ‘go green’ kind of person. After moving from the UK to Pakistan, she realised that recycling did not get the importance it deserved here. She made changes to her own lifestyle but eventually felt that that was not enough. Slowly, she started spreading awareness and encouraging friends and family to participate. In order to really save on household waste, Shirin encouraged every family member to do his/her bit.  Not only did her family learn to recycle appropriate materials, they also got in the habit of saving paper and reusing whatever they could. She kept her household help involved in the process so that they would also understand the benefits of recycling, and pass on these values to their children.

She is also displeased with the current informal recycling system which involves Afghan children rummaging through garbage dumps to find items that can be salvaged. “I wish there was another way for them to earn their livelihood. They are vulnerable to so many diseases,” she says with a sigh.

Shirin’s efforts to preserve the environment are not limited to recycling; she makes an attempt to incorporate her philosophy into her life on every level. “I do not believe in waste of any kind. I make an effort to switch off lights that are not being used and save whatever I can. It’s not about what you can afford — it’s about the need to save non-renewable resources.”

As far as the general public is concerned, Shirin believes that people just need to be persuaded to change their lifestyles. So next time you’re using an ATM, you know just what to do with your mini-statement.  Recycle it!

Bottom of the food chain