CJP questi­ons if the four prison­ers were killed and under what circum­stance­s.
By Faisal Shakeel
Published: January 25, 2012
Tweet Email 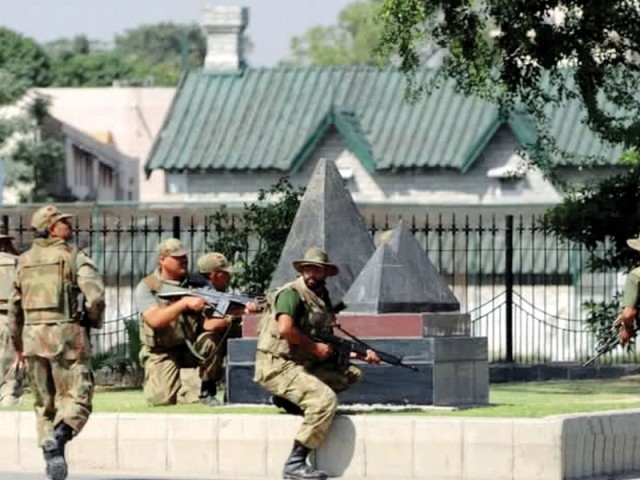 The Supreme Court has taken notice of the alleged kidnapping and deaths of prisoners from the Adiala Jail and summoned the attorney-general of Pakistan and the chiefs of the Inter-Services Intelligence and Military Intelligence. PHOTO: FILE

ISLAMABAD: The Supreme Court has issued notices to the chiefs of Inter-Services Intelligence and Military Intelligence agencies to explain the circumstances leading to the deaths of four men being tried under the Army Act.

Eleven prisoners, convicted for attacking the Pakistan Army’s General Headquarters in Rawalpindi and the ISI’s Hamza Camp, had gone missing from the Adiala Jail, and four were later found dead.

The three-judge bench, headed by Chief Justice of Pakistan Iftikhar Muhammad Chaudhry, also issued notices to the defence secretary, the Advocate-General of Pakistan Maulvi Anwarul Haq and the accused commandant. The respondents have been told to file replies in the next hearing on January 30.

The orders were passed on Wednesday when the court took up a constitutional petition for hearing, after removing objections raised over it by the Registrar office.

Chief Justice of Pakistan Iftikhar Muhammad Chaudhry, while hearing the case on Wednesday, said that when this case was brought before the SC, the court was told that the prisoners are under the custody of intelligence agencies and are being tried under the Army Act. “Now, four of them are dead. It must be found out how they died.”

The CJP asked the Pakistan Army’s legal officer if it were true that the four prisoners were killed. “If they have been murdered, then this is a grave issue.”

Petitioner Rohifa, through her counsel Barrister Tariq Asad, had petitioned the court for provision of ‘due process of law’ to her three sons Syed Abdus Saboor, Syed Abdul Basit and Syed Abdul Majid.

“The matter is of public importance. There is apprehension of deaths of the remaining detainees,” the petitioner informed the court. After the Registrar raised objections to the petition, Syed Abdus Saboor was killed by intelligence agencies, his brother Mufti Shakoor told The Express Tribune.

Agencies had taken Saboor into custody along with his two brothers and eight others on charges of the attacks, Asad said.

Abdul Saboor, 29, is the fourth civilian detained in the case to have died in mysterious circumstances over the past six months. Earlier, Mohammad Aamir died on August 15, 2011, Tahseen Ullah on December 17, and Said Arab on December 18.

Justice Arif Khilji observed that the manner in which bodies were left on the road for collection reflected a sad state of affairs. Asad said the accused started leaving bodies by the roadside after the Lady Reading Hospital in Peshawar refused to accept them.

Earlier, Asad said, the families of at least three men, who had died in custody because of torture, were left at the Lady Reading Hospital for their families. In the missing prisoners’ case, officials had told the court that these men were in custody of intelligence agencies and were being tried under the Army Act.