The painful process of acceptance begins

The painful process of acceptance begins

As rain poured down across the countr­y and nation­al flags flew at half-mast to mourn the 152 passen­gers of the...
By Zia Khan
Published: July 30, 2010
Tweet Email 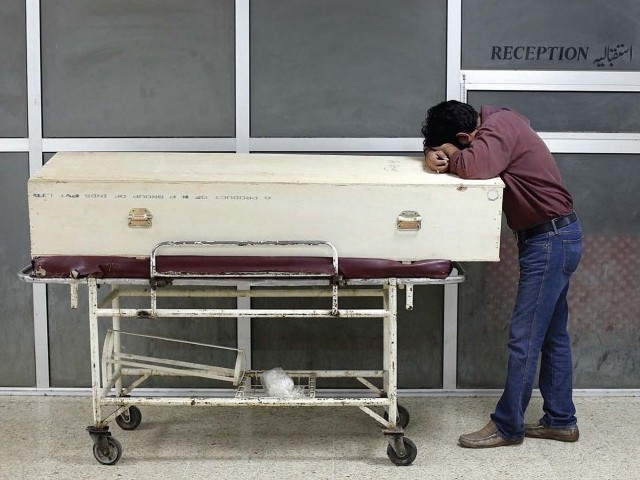 A youth mourns the death of a loved one killed in Wednesday’s plane crash. PHOTO: REUTERS

ISLAMABAD: As rain poured down across the country and national flags flew at half-mast to mourn the 152 passengers of the ill-fated Airblue flight ED202, the victims’ families, still in disbelief, found themselves going through what seemed to be even more painful processes.

The families went through anguish even before identifying the remains of their loved ones. Many found that they will not have the consolation of seeing the faces of those they loved and cherished for one last time.

Some found personal belongings, others attire. Most, however, had to brave an almost unfair process of giving DNA samples to help find the last mortal remains of people they never knew they had bid farewell to forever on Wednesday morning.

The rest, it seemed, was just a formality. A five-member investigation team was formed on the orders of the prime minister comprising Civil Aviation Authority officials.

President Asif Ali Zardari and Prime Minister Yousaf Raza Gilani directed the authorities to speed up the investigation to find out the cause of the tragedy.

At a meeting here on Thursday, Gilani briefed Zardari about the formation of an inquiry committee to probe into the air crash and the search and rescue measures being taken by various government bodies.

President Zardari, while expressing his deep grief and sorrow over the incident, said the event had saddened the entire nation.

The national flag flew at half-mast on important government buildings in Islamabad and all four provincial capitals. Most official activities were cancelled to focus on relief efforts.

The president said the inquiry committee’s report should be made public so that people know what really led to the tragic incident, his spokesperson Farhatullah Babar said.

President Zardari also asked that all possible steps be taken to facilitate the heirs of the victims.

Meanwhile, officials of the company which had insured the crashed Airblue aircraft have reached Pakistan to calculate the compensation package.

An airline official told The Express Tribune that the team had arrived without mentioning the insurer’s name.

According to some reports, the Bermuda-based Catlin Group is Airblue’s lead insurer – a leading global specialty insurer and reinsurer.

There were four foreign passengers who had died in the crash. Two of them were Americans, one each from Somalia and Austria.

According to the international insurance rules, the kin of each foreign victim would get a compensation of at least a million rupees. However, the exact amount is still uncertain.

In the case of the 2006 PIA Fokker plane crash near Multan, the authorities initially announced a compensation of Rs500,000 per victim but they actually paid Rs2 million to the families of each victim. In the 2006 crash, 52 people aboard the aircraft had died.

The Airblue official said that the process “may take some time because the process to identify the deceased was still incomplete”. He said the next step would be identification and determination of who would receive the compensation. The government has already announced to pay Rs500,000 to the kin of each victim.

It is learnt that the insurer would also compensate the airline on account of the loss of its plane.

According to some estimates, the hull value of the Airbus A321-200 is $35 million. The hull value includes instruments, radios, autopilots, wings, engines, and other equipment attached to or carried on the plane as described in the policy.

Meanwhile, a six-member delegation of the aircraft manufacturer Airbus also arrived in Islamabad on Thursday to determine the cause of accident. The delegation is headed by Nicolas Bardou, the director of the aircraft manufacturers’ flight safety. The Airbus, European Aeronautic Defence and Space (EADS) is owned by a consortium of four European countries – France, Germany, Belgium and Britain.