Focus on South Asia: ‘If terrorism is here to stay, how will we fight it’

Focus on South Asia: ‘If terrorism is here to stay, how will we fight it’ 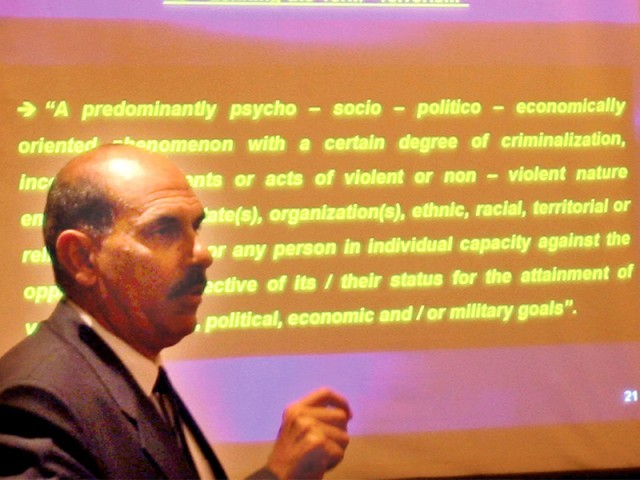 Terrorism can never be wiped out in Pakistan or any other country. It can only be contained and the real menace is extremism which manifests itself as terrorism, said academics from Sindh University Jamshoro, and security officials at a seminar on Friday.

“A mechanism to maintain peace is no longer available as the nature of threats has changed in the 21st century,” said Professor Dr Pervaiz Iqbal Cheema. He and the other experts were discussing how to maintain international peace and security in the 21st Century with a special focus on the impact on South Asia.

A running theme throughout the seminar was the opinion that the term ‘terrorism’ has too broad a definition and is not accurate enough to define what guest speaker Colonel Ahmed Raza referred to as “a complex phenomena that has psycho, social, economic and political” factors.

Dr Pervez Ahmed Pathan supported this view. “The UN has no clear definition for terrorism. It can be state [terrorism], jihad, [or] a freedom movement and has links with so many different perspectives.”

Many of the speakers felt that terrorism was not a recent phenomenon but, “the oldest profession known to mankind”, contrary to the common saying that this dubious honour is taken by prostitution. The history of ‘terrorism’ was discussed going back as far back as the Cimbrian War, 100 years BC, when according to Colonel  Ahmed Raza the term ‘terror’ was first employed to describe a war tactic.

Sindh University Vice-Chancellor Dr Nazir Mughal highlighted that it is claimed that terrorism and extremism have had a profound effect on education because madrassas play a role in the social, educational, and political development in Pakistan. “This is where tolerance, understanding and the acceptance of other religions need to be taught,” he said. Mughal recommends that the government create a five- to ten-year feasibility plan for education, a national literacy fund, a separate national budget for education, and quarterly evaluations for madrassas. Madrassa teaching faculty should hold dual degrees, theological and non-theological.

It is disputed, however, that madrassas are a prime factor in radicalisation. A Learning and Educational Achievement in Pakistan Schools report estimates that less than one per cent of Pakistani children attend madrassas. But as there is no official consensus on what the actual number is, it could be much higher.

Hyderabad Deputy Inspector General of Police Dr Sanaullah Abbasi believes that terrorists must be classified as criminals. He asserted that the police are now a target because they are seen as a symbol of the state. To complicate matters, the country is not applying the correct counter-terrorism strategies. “Effective policing and intelligence gathering deliver better results than military force.”

In a telling revelation Abbasi claimed that 70% of the police budget is allocated to what he called the ‘establishment’, leaving only about 30% for the operations end. Low budgets combined with low conviction rates, weak forensics work, little to no phone surveillance, no witness protection programme and a lack of protection for judges weaken police efforts. “By no means is [the police] too flawed to be fixed,” he stressed.

Dr SM Qureshi, an honorary adviser to the governor, mentioned that when Pakistan was making an effort to become self-sufficient, the country’s attention had to be diverted towards security.

The seminar was held at Avari Towers.