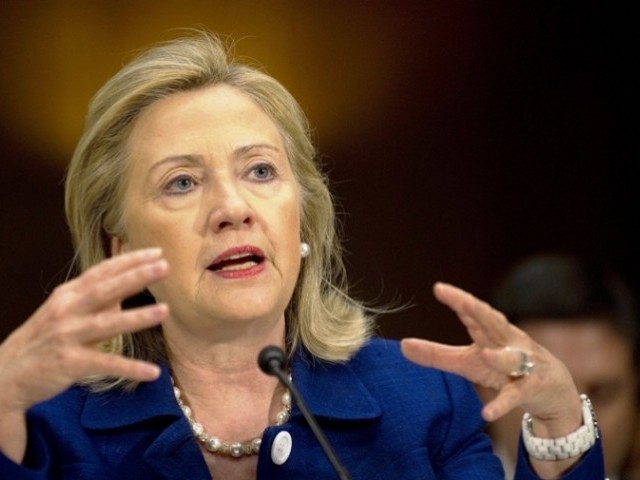 US expects Pakistan to resolve its internal matters as per rule of law, constitution; Clinton welcomes Sherry Rehman. PHOTO: AFP/FILE

WASHINGTON: US Secretary of State Hillary Clinton says that the United States has concerns about the situation in Pakistan, but stood in favour of the democratic set up in Pakistan, expecting it to resolve the country’s internal matters on its own as per its laws and constitution.

Speaking to reporters after a meeting with the Algerian Foreign Minister, Secretary Clinton said, “It has been our position to stand strongly in favour of a democratically elected civilian government, which we continue to do, and we expect Pakistan to resolve any of these internal issues in a just and transparent manner that upholds the Pakistani laws and constitution.”

She added that she was “delighted” to welcome Sherry Rehman to the State Department during their meeting. Secretary Clinton said that she told Rehman, Pakistan’s Ambassador Designate to the US, that the relationship between both the United States and Pakistan is crucial “to both of our countries, to the future of our people, to the safety and security of South Asia and the world; we recognise there have been significant challenges in recent months, but we are steadfastly committed to this relationship and working together to make it productive.”

In response to a question, Secretary Clinton also condemned the reported video of US Marines urinating on the bodies of Taliban fighters. “It is absolutely inconsistent with American values, with the standards of behaviour that we expect from our military personnel and the vast, vast military personnel, particularly our Marines, hold themselves to.” She added that those who participated or knew about the incident must be held accountable.

On the subject of reconciliation in Afghanistan, Secretary Clinton said, “We don’t have any idea standing here today what the outcome of such discussions could be. I think all of us are entering into it with a very realistic sense of what is possible, and that includes, of course, President Karzai and his government, which, after all, bear the ultimate responsibility and the consequences of any such discussions.”

Next week, Special Representative for Afghanistan and Pakistan Marc Grossman will meet with President Karzai in Kabul, in trip that is believe to deal with preparing grounds for peace talks with the Taliban.