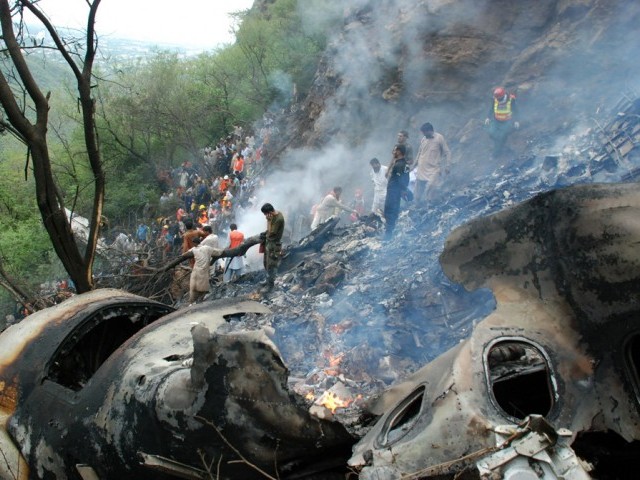 Rescue workers search for survivors in the wreckage. PHOTO: AFP

An Airblue flight flying from Karachi to Islamabad crashed into the Margalla Hills on Wednesday morning killing all of 152 passengers on board.

The plane lost contact with the control tower shortly before the crash which occurred amid thick fog and heavy rainfall in Islamabad. The plane caught fire after the crash which severely hindered relief efforts.

It is reported that the pilot was instructed to perform a go around due to traffic on the runway, however due to severe weather in the city, very low visibility caused the crash.

Other sources put a fuel tank explosion as the reason for the crash.

The exact reason for the crash has not yet been determined.

An investigation into the air crash is underway, while Prime Minister Gilani has ordered the Defence Ministry to conduct an inquiry into the matter.

Meanwhile, the CAA has recovered the blackbox from the blast site, which it is hoped will help determine the cause of the crash.

Pakistani health officials have said they would have to use DNA tests to identify charred bodies plucked from the wreckage.

“Most of the dead bodies are in pieces, only body parts, some of them badly burnt… these can only be identified through DNA,” Mahmood Jamal, chief of the Pakistan Institute of Medical Sciences (PIMS) told reporters.

“Some 300 body bags, 40 blankets and 10 bundles of rope have been air dropped at the crash site,” said the national disaster management authority.

You can view pictures of the incident here.

@khudipk We at Khudi are shocked and saddened to hear that 6 members of the Pakistan Youth Parliament were onboard Airblue…http://fb.me/BBzq91Lv

No survivors in the plane crash says Rehman Malik.

Bad weather and wind conditions did not allow the plane to land by the regular route. Qamar Zaman Kaira says we should wait for inquiry and not rely on speculations. Kaira calls for patience.

The plane had its landing gear down at the time of the crash according to the Spokesman of the CAA.

According to AFP, rescue workers have recovered the bodies of more than 100 people.

One of the youth parliamentarians going to attend the Youth Parliament session is also reported dead. No survivors have been brought to the hospitals and there no survivors at the crash site according to Express 24/7 reporter Sabur Ali Syed.

Information desks have been set up at Islamabad, Lahore and Karachi airports and families of the victims can contact Crisis Management Cell at 051-9211223-4.

Pakistan Army has set up rescue camps near the crash site

May I try and put some perspective on this for those above who don’t seem to know much about aviation but are writing anyway:

If you are using runway 12 as it seems (the Murree road side) there is no ILS. The ILS is on runway 30 (the opposite side). So the procedure (which I never thought was safe) is you fly the ILS to 30 and then you break off and turn right and fly parallel to the Margalla hills and then turn back in and land on 12. It’s not a circle but more of a race-track pattern.

You may ask why not have the aircraft turn left rather than right towards the Margalla Hills. The reason is that on the left of runway 30 is Dhamial Air Base, GHQ and so on and as far as I remember that is all so-called “Restricted” airspace. You cannot fly over it.

This is CFIT (Controlled Flight Into Terrain) not as stated above.

Final point, when you are flying parallel to the Margalla Hills, you are required to keep the airport on your left in sight. So I can visualize the captain in the left seat looking left. Maybe the F/O was flying and craning his neck too. They just seem to have drifted into the Margalla Hills — perhaps because of high winds. They lost what is called “Situational Awareness”. Basically they did not know where they were.

May those who perished rest in eternal peace.

Rescue workers have recovered the remains of more than 80 people and the remains are being airlifted, a senior police official told AFP.

“I saw a big ball of smoke and fire everywhere with big pieces of aircraft rolling down the hill,” said police official Haji Taj Gul.

“The plane was flying very low. Then we heard a loud noise,” Wajih-ur Rehman, a resident of E-7 told AFP.

“The plane had lost balance, and then we saw it going down,” Saqlain Altaf, an Islamabad resident who was on a family outing in the Margalla Hills, told ARY News

“I saw it pass over my house and then there was a very loud explosion” – Anjum Rahman, Express 24/7

According to sources, six university students were on-board the Airblue flight to attend a youth parliament session in Islamabad.

Rescue officials confirm that the death toll now stands at 45. Navy Commander Raja Jamil who is heading rescue efforts added that there are no survivors from the site area his team has covered. He said weather conditions are hampering rescue efforts via helicopter.

One body reaches PIMs Hospital. Ambulance hampered from entering hospital premises due to crowds of people on location.

Plane’s wreckage spread over 400 metres across the Margalla Hills.

20 dead bodies confirmed, including two women and a child not more than 15 years old.

Express team reached the crash site on foot. Citizens are complaining that the helicopter rescue service has not been efficient.

Smoke is still rising from the crash site.

Airblue Chairperson says no flight has been delayed and Airblue is refunding passengers who wish to cancel their reservations.

Rehman Malik says a five member CAA team will be investigating the cause behind the crash.

The bodies of the victims will be taken to the hospital. Some may need identification.  The plane was redirected to land from the Pindi Muree road.  It came down to 2600 and went back to 3000. Only five survivors have been confirmed so far. Twelve passengers had failed to show up for the flight.

PAF is working on decoding the black box. Raheel Ahmed, GM of Airblue says the Airblue plane that crashed was relatively new and was only eight to 10 years old.

A list of past plane crashes by Pakistani airlines is available here: Plane crash history with death toll.

The list indicates that in most past cases of plane crashes there are very few survivors.

Airblue officials say the plane had no technical faults.

Reports indicate that the pilot was aged 65.

Chairman NDMA says the plane hit a vertical 90 degree cliff head on which made the rescue operations very difficult. He further said it will take two days to remove the dead bodies and wreckage. Rescue efforts have been hampered by the 90 degree angle of the cliff.

Chairman CDA, Imtiaz Inayat says around five to six people have been rescued. He says rescue operation are in full swing and the authorities have enough equipment for the rescue operations.

Express 24/7 host Anjum Rehman and an eyewitness says that the plane was flying very low and there was no fire in the fuel tank three minutes before the crash. Conflicting reports have been received of a fire in the fuel tank of the airplane.
No surviors or bodies have so far reached the hospitals.

Seven helicopters are carrying out rescue operations at the site.

The CAA has said the scheduled Flight was ABQ-202, KHI-ISB, reportedly an Airbus A321. The name of the captain of the aircraft is stated as Pervez Iqbal Choudhry.

The crash site is a national park, and it is presumed that the plane crashed into a steep ridge in the hills.

Eyewitnesses say the plane was flying at an extremely low altitude. They say they have never seen a plane flying on this particular route.

GM Marketing, Airblue Raheel Ahmed says the families of those on the Airblue flight will be transported to the capital via Airblue.

Four dead bodies have been identified as males and four females. According to Rescure 1122 the survivors and bodies are on their way

Dead bodies are charred beyond recognition.

Citizens complain that two hours have passed and helicopter services have not been bought in.

Families of those who were on board have reached the hospital and some have also attempted reaching the Margall hills crash site.

Twenty bodies have been recovered from the wreckage. No survivors or bodies have reached Pims hospital although it has been more than one and a half hour, according to Express 24/7 reporter Sabur Ali Syed.

Two days have been set for the rescue and clean up operations.

Emergency has been declared in the hospitals and doctors have been called in for duty.

There were five children and two infants on board according to latest details released by CAA.

A Somalian diplomat was reportedly also on board the Airblue flight.

The ISPR has announced that an infantry battalion and three helicopters are engaged in rescue operations.

Interior Minister Rehman Malik has said the black box will help determine the real cause of the crash. The Chairman of Airblue has said an investigation is being carried out into the reason behind the crash.

The Civil Aviation Spokesperson has said all efforts are being made to search for survivors.

15 dead bodies can be seen on the site including those of two women. The bodies are badly burnt and are beyond recognition.

Interior Minister Rehman Malik has said that the entire area is being searched for survivors and the list of passengers has been released.

This is feared to be the biggest disaster in Pakistan’s aviation history. The last crash happened in 2006, when a Fokker plane crashed into a wheat field near Multan, killing all 41 passengers and 4 crew members on board.

Six bodies including that of the pilot have been recovered.

Some reports indicate that the plane exploded in the air due to a problem in its fuel tank.

Families of victims have been requested to contact the Crisis Management Cell at 051-9211223-4.

There are reports of several casualties, but the exact death toll is still unknown.

The DIG Operations has been asked to supervise rescue efforts.

There were 159 passengers and crew on board.

Prime Minister Yousaf Raza Gilani has ordered the Defence Ministry to hold an inquiry. The flight was asked to circle above the airport and delay landing as the Islamabad airport was busy.

The flight was asked to delay landing at the Islamabad airport as the airport was busy. The plane then came down near Margalla Hills.

NDMA has sought the help of the army for rescue operations.

Family members of passengers have gathered at the Islamabad airport waiting for some news about their dear ones.

Rescue workers have recovered at least one dead body.

Foot rescue workers have reached the area and are carrying out operations. Rescue workers are facing difficult because site is not easily accessible and the weather is also difficult.

Three rescue helicopters have reached the site of the crash.

The plane was carrying 146 passengers and six crew members.

Hospitals in Islamabad have been put on high alert. The airplane was a private Airblue plane.

Police and rescue teams have reached the site of the crash. Helicopters seen reaching the area.

Police and rescue teams facing difficulty in reaching the site of the crash.

Thick clouds of smoke were witnessed rising from the Margalla Hills.

Pilot’s fatigue may be behind crash: Palpa President