Electricity and gas: More knots in the tangled web of the energy crisis

Electricity and gas: More knots in the tangled web of the energy crisis

Despit­e much talk, the govern­ment fails to take any tough decisi­on on the energy sector.
By Zafar Bhutta
Published: December 31, 2011
Tweet Email 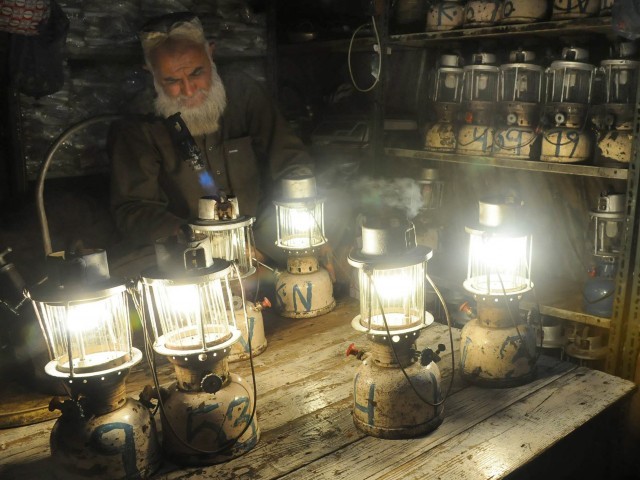 Pakistan averaged eight hours of loadshedding in the past year. PHOTO: MOHAMMAD SAQIB/EXPRESS

The year 2011 came and went with the government failing to take any of the tough decisions needed to reform the energy sector and bring the country out of what now appears to be a chronic power and crisis.

The situation was quite literally bleak in Pakistan this past year: the country averaged about eight hours without electricity, with the average shortfall of power at around 5,000 megawatts. Production peaked at about 15,000 MW, but this is well below the peak demand of about 19,000 MW.

The power crisis has had a devastating impact on the economy. The finance ministry estimates that GDP growth would have been at least 3% higher had the power crisis not happened.

It is not as though there was ever any shortage of installed capacity. The country can produce about 20,800 MW when all turbines are running at full capacity. The problem is the fuel mix: most power plants run on oil, which is now running at over $100 per barrel.

The government is unwilling to pass on the effect of that cost increase to consumers, so it tries to subsidise the entire country’s electricity consumption which cost about Rs300 billion in the fiscal year that ended June 30, 2011.

That amount, however, does not cover the entirety of the difference between production costs and billed revenues, which leads energy companies to build up huge liabilities – currently estimated at Rs350 billion – a phenomenon referred to in common parlance as ‘circular debt’. In 2011 independent power companies sued the government for its violation of their contracts, which require them to always be paid on time by the state-owned utility companies. As it struggled to pay the older contractual obligations, this year the Supreme Court forced the government to roll back the rental power policy, which sought to add more capacity to the grid, but at exorbitant rates.

The grid is also highly inefficient, with about 24% of all power produced never being billed due to either technical faults or outright theft. The global average is 12%. The problem of bill collection has only gotten worse in 2011, with average bill collection declining by 15%. Some of the largest and most profitable companies in the country – including Pakistan State Oil – are on the verge of insolvency because of the amount of cash tied up in circular debt.

The power plants can run on gas, which is much cheaper – producing electricity at Rs5 per unit as opposed to the Rs18 per unit that oil-fired power plants now cost. But the country now has a severe gas shortage, which has been exacerbated by the government’s own short-sighted policies as well as the circular debt. Production is currently at about 4,100 million cubic feet per day (mmcfd) while demand is estimated at 5,100 mmcfd.

Gas production in Pakistan is now expected to decline sharply, largely owing to the old gas fields going offline and newer gas fields not being discovered at the same pace. The single biggest reason is the government’s refusal to pay global market rates for the gas that exploration companies find, which has caused investment in the oil and gas sector to all but dry up.

Petroleum Minister Asim Hussain tried to get the government to pay $3.75 per million British thermal units to gas companies, but owing to bureaucratic bungling has not been able to push that policy through. The minister has tried instituting an entirely new policy in the gas sector, but failed to do so this year. It is unclear if he will succeed for next year.