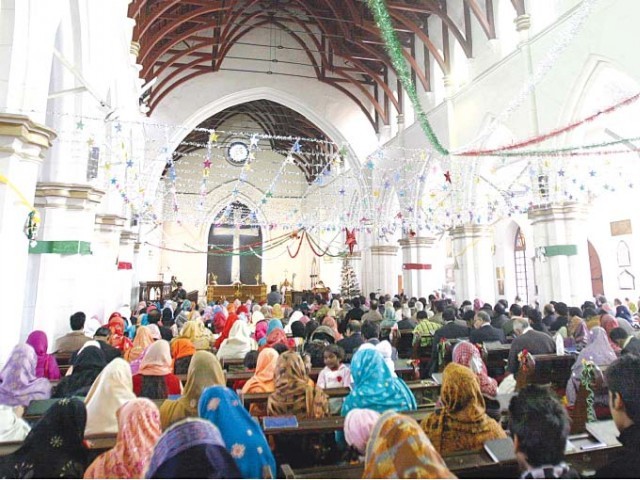 Like elsewhere in the country, the day was celebrated with religious fervour and peace at Saint John Cathedral church in Peshawar on Sunday. PHOTO: PPI

SWAT/ABBOTTABAD/PESHAWAR: Festivities were in the air as the Christian community celebrated Christmas in Peshawar and different parts of Swat and Hazara.

In Swat, after the Christmas mass, leaders of the community requested the government to reconstruct the only Catholic church that was destroyed by militants. The church, established in the premises of Sangota Missionary Girls School in the state era, was destroyed when the militants blasted the school building.

The community currently has access to three makeshift buildings, which they use for their religious gatherings.

The Christian community settled in Swat in 1964. “Swati people are peace loving and treat us like brothers. We have the freedom to observe our religious events,” said Khalid Masih who has been settled in Swat for the last 40 years.

Shamim, a headmistress in a government school, who had come to meet her family, was rather unhappy due to load shedding on Christmas. “We belong to this country and the government should also think about us; they don’t cut power on Eid, they should respect our celebrations too. Last night, we performed our religious rites in darkness.”

Another member of the community said, “We are in love with the high peaked, snow-capped mountains. This is our home, our land and we cannot leave this place.”

The Christian community in Hazara observed the day with mixed feelings. Volatile security, deep-seated hatred and price hikes blurred the festivities of Christmas.

Although the Christians appeared to be satisfied with the security arrangements, a sense of insecurity, mainly due to religious disharmony and suicide attacks across the country, marred the sense of joy on the occasion.

“We have no complaints against the attitude of people towards us because they are educated and never pose any threat to Christianity,” said Riaz Mubarak, a priest at Saint Luke Church Abbottabad while talking to The Express Tribune.

He said that all festivities including Christmas carols, Santa Claus, and decoration at all the churches went unhindered across Hazara. However, he preferred to keep mum when asked about recent incidents of hatred against Christians in the district, including torture of a Christian housemaid at a police station after her arrest on the charges of burglary and the eviction of a Christian girl for misspelling a word at school.

Dr Irgan Nasir, caretaker Saint John Church Haripur, also expressed satisfaction over the security arrangements but appeared to be apprehensive of the security situation across the country. He said that his community was exposed to mixed feelings of fear and joy, as they feel as insecure as other Pakistanis.

Church secretary Naseem Raza Khokhar said that price hike was the biggest obstacle in enjoying the festivities. He said that the price of a Christmas tree of normal size with ordinary decoration had increased by twice as much as last year or more. Load shedding was another problem that disturbed the celebrations of Christmas, he added.

‘Christians working for peace in Pakistan’

In Peshawar, the biggest Christmas mass was held at the historical St. John Cathedral Church in Peshawar cantonment, where special prayer and services were held.

On this occasion, the church was decorated with colourful lights and buntings. The church also hosted a Christmas tree, illuminated with lights.

On the occasion, the speakers and the bishop threw light on the philosophy of Christmas, saying Christmas calls for peace, reconciliation and inter faith harmony for promotion of a tolerant society. The bishop then prayed for peace and prosperity of Pakistan.

The speakers said Christians are working day and night for the promotion of peace, interfaith harmony, respect and reconciliation in the country.