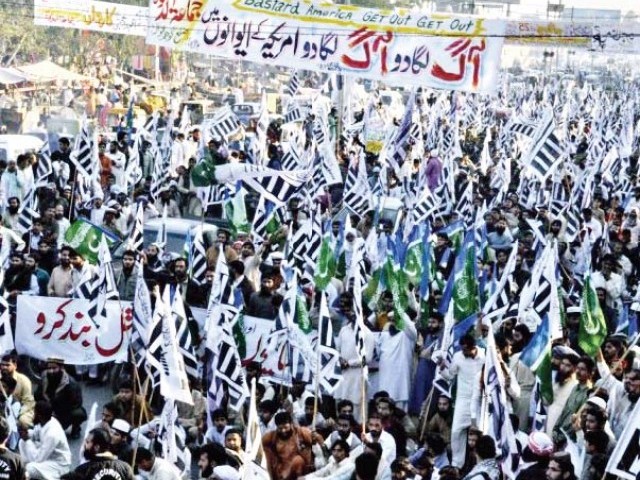 When such rallies take place, there is cause for worry because an implication of their success is that the state is becoming dysfunctional.

The recent Pakistan Defence Council (PDC) rally in Lahore was ‘mammoth’, orchestrated as it was by some of the most organised religious parties in the country. The idea was to cross the benchmark established by Imran Khan’s Tehreek-e-Insaf earlier — and it was probably crossed. The reigning presence was that of the Jamaatud Dawa (JuD), as its followers outnumbered the Jamaat-e-Islami ones, the next big cadre party in the country. In all, 30 religious outfits were present, including the single-leader party, the JUI of Maulana Samiul Haq. Imran Khan’s party was present in the person of a senior representative, who read out his party chief’s speech to the people gathered. There was Sipah-e-Sahaba too, its status made unclear — more or less like Jamaatud Dawa’s — through litigation after it was banned by the UN Security Council. There were the expected appendices from the non-religious world: Hamid Gul, Sheikh Rashid, Ijazul Haq, etc, who once represented the supremacy of the army in the country. This is what the leaders — led on the occasion by Hafiz Saeed of the JuD — said: “The rulers should immediately dissociate themselves from the US war on terror, permanently cut off the Nato supply line and prepare the nation for jihad in case the US dares invade the country”. The ‘mammoth’ show of force, seen after a long time since the disbandment of the MMA alliance, underlined yet another policy directive: don’t give the Most Favoured Nation (MFN) status to India and decide against allowing a trade route to India through Pakistan, because there are disputes to be resolved with India and revenge to be taken from it for the crimes it had committed against the Kashmiri Muslims and because it had tried to destroy Pakistan through a ‘water war’. The issue of Babri Mosque was added to the list of battle cries against it — and the solvent of all the challenges faced by Pakistan was jihad fought by the proxy warriors organised by the religious parties. Both the US and India were the targets of this pledged Armageddon.

It was the biggest Wahhabi-Deobandi gathering seen in a long while. The Barelvis were not there but Allama Tahirul Qadri of the Pakistan Awami Tehreek (PAT), speaking elsewhere in the country, asked the Supreme Court to get rid of the PPP government by forcing a midterm election held under a neutral caretaker government prescribed by the honourable court. The message to the military was: if the Nato supply routes are reopened, the jihadis will attack the trucks. Maulana Samiul Haq raised the rather grandiose slogan: “We will attack Indian, US, Russian and Nato forces if they try to violate Pakistan’s sovereignty”. JuD leader Hafiz Abdur Rehman Makki was more specific: “Our men are trained to use rifles and Kalashnikovs. When they head towards India with weapons, no one can resist them”. Sipah-e-Sahaba’s chief, Maulana Ahmad Ludhianvi, boasted that 4,000 young people he had sent for jihad had died.

This is the consequence of a number of vectors aligning themselves: the break between the US and Pakistan Army after the Salala attack; the consensus built by the PPP government in parliament in favour of the Pakistan Army against the US; the public mind as moulded by the media in favour of an isolationist policy under which jihad becomes possible; the memogate affair and the case related to it at the Supreme Court asking it to decide whether the PPP leadership was guilty of treason against the state by endangering its national security as represented by the Pakistan Army. Jihad, which has demonised Pakistan in the eyes of the world and given rise to proxy warriors gone haywire inside Pakistan after affiliating themselves with al Qaeda, is once again seen as the prescription. The power of the clerics who organised the ‘mammoth’ rally is beyond question. It is supplemented by militants fighting the military in Fata and by the synergy provided by a consensus for the demand that there be Sharia in Pakistan. When such rallies take place, there is cause for worry because an implication of their success is that the state is becoming dysfunctional, approaching the prototype of failed states like Somalia, where only jihad prospers.