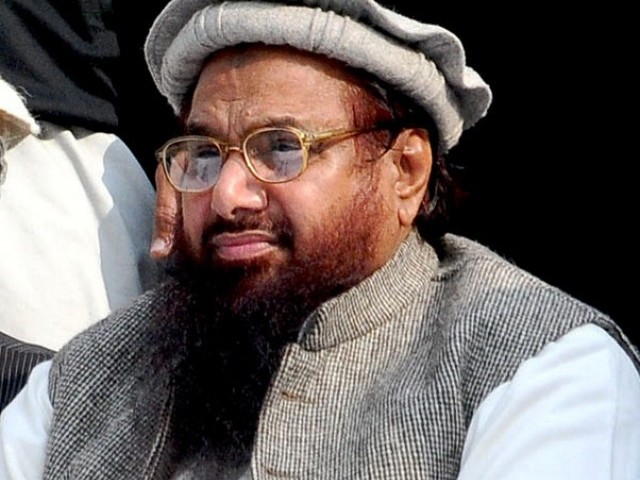 Jamaatud Dawa (JD) chief Hafiz Muhammad Saeed vowed on Sunday that the jihad to oust Indian forces from Kashmir would continue, the first time he has made a reference to jihad since his group was declared a terrorist outfit by the United Nations in 2009.

Saeed was speaking at the ‘Difa-i-Pakistan Conference’, a gathering of thousands of supporters of Wahhabi and Deobandi parties at Minar-i-Pakistan on Sunday to protest against ‘US and Nato terrorism’. All the speakers at the rally called for jihad and told their supporters to prepare for war.

During his speech, Difa-i-Pakistan Council Chairman Maulana Samiul Haq read out an oath to the audience that they would participate in jihad when the Council gave the call. “We will attack Indian, US, Russian and Nato forces if they try to violate Pakistan’s sovereignty,” they said, repeating after Haq.

Haq said the various parties at the conference had united and would work together until their goals were achieved.

The organisers had invited the parents of men killed fighting in Kashmir and Afghanistan to the conference. A man who had lost three sons and two nephews was called to the dais to speak briefly. From the stage, men on loudspeakers led the crowd in chants of ‘Sabilina sabilina, al jihad al jihad’, ‘India ka aik ilaaj, al jihad al jihad’.

‘Difa-i-Pakistan jihad-i-fi sabilillah se hoga’ (Pakistan’s defence is only possible through jihad) proclaimed a huge banner, decorated with images of missiles, tanks and fighter jets, that formed the backdrop to the stage. Speakers walked to the stage accompanied by gunmen.

The crowd was dominated by JD activists waving the group’s black and white striped flag, which is also the flag of Lashkar-i-Taiba, proscribed as a terrorist outfit by Pakistan. In December 2009, the UN declared JD an alias of LT, which is believed responsible for the Mumbai terror attacks.

In his address, Hafiz Saeed said jihad was obligatory for Muslims. He said if the Americans tried to invade Pakistan, they would be resisted and killed. He said America had been trying to get Israel to take out Pakistan’s nuclear weapons, but was now planning the task itself. He said that Pakistan and Afghanistan were like twin brothers; whoever tried to harm one, would have to face the people of the other country. He demanded that the Pakistani government end all contacts with the US. He said that a similar rally would be held in Rawalpindi. “We will no longer fight America’s war, we will fight Pakistan’s war,” he said.

He said that JD would not allow the government to grant most-favoured nation trading status to India. “We will surround the markets where Indian goods are sold,” he said, adding a call for revenge against India for the separation of Bangladesh from Pakistan.

JD leader Hafiz Abdul Rehman Makki said that the participants wielding JD flags had been trained to use rifles and Kalashnikovs. “When they head towards India with weapons, no one can resist them,” he said.

Maulana Ahmad Ludhianvi spoke against Ahmedis. He said that US-Pakistani businessman Mansoor Ijaz was an Ahmedi and was conspiring against Pakistan in the form of the memo scandal. He said 4,000 young people he had sent for jihad had died.

Former Inter Services Intelligence chief General (retired) Hameed Gul said Pakistan did not want war against the US, but “America has destroyed our lives and now we have no choice but to take a firm stand against it”. He said that he supported those who wanted to fight for the country after the Nato strikes that killed 24 soldiers. He said that an Islamic revolution, not general elections, was what Pakistanis needed to resolve their problems.