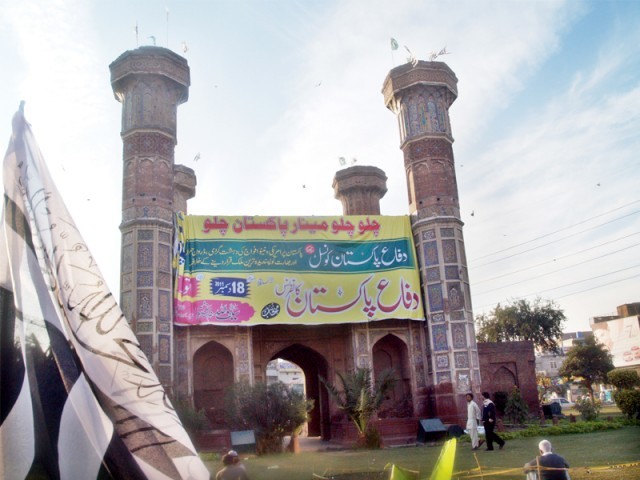 The Jamaatud Dawa (JuD) is violating rules issued by the district administration for the ‘Difa-i-Pakistan Conference’, which is to be held at Minar-i-Pakistan today in protest at “America and Nato’s terrorism”.

Banners and posters advertising the conference and flags of Lashkar-i-Taiba, an outfit thought responsible for the Mumbai terrorist attack of November 2008, have been put up around the city. The group has also set up reception camps. All of these actions are in violation of a code of conduct issued by the administration, according to an intelligence agency report. It said the code was being “violated openly, particularly regarding display of flags and posters of a proscribed organisation”.

The United Nations Security Council declared JD an alias of Lashkar-i-Taiba and banned it on December 10, 2008. The federal government announced a ban on the group in Pakistan the next day, though it later emerged during a hearing in the Lahore High Court that the ban had never been officially notified. The JD denies any links with LT, insisting that it is a charity organisation. The JD has regularly arranged rallies in Lahore in recent months with no resistance from the authorities.

According to the code of conduct for Sunday’s rally issued by the district administration, there must be no wall-chalking, banners, streamers, posters or flags advertising the conference in the city. This rule has been openly violated, most spectacularly by a massive banner on Chauburji, a historic building overseen by the Archaeology Department.

The code of conduct states that no reception desk be set up, and that the speakers at the rally must not say anything likely to incite hatred against any religious party or sect. No speeches against constitutional offices, the armed forces or the judiciary are allowed. “No banned, proscribed organisation or their members will be allowed to address the participants,” it states.

It also states that “disputed affairs” must not be “touched/discussed”. The code bans the public display of arms. Organisers are not allowed to make announcements concerning the conference via a van or other vehicle.

“No one will be forced to attend the public gathering. No shop or business activities will be closed forcibly. There shall be no political slogans/hooting of any political/religious party,” says the code.

According to the intelligence agency’s report, more than 15,000 chairs have been set up in Minar-i-Pakistan for the rally. JD spokesman Yahya Mujahid said the number of chairs for the rally was double the number placed there for the Tehreek-i-Insaf rally held at the same venue on October 30.

The intelligence report said that about 3,000 volunteers would be deployed at the venue for security. JD chief Hafiz Muhammad Saeed has said that a lot of people will participate in the conference.

In a press release issued earlier, organisers urged religious leaders to make contacts in mosques, schools and the streets to inform people about “American and Nato aggression” against Pakistan and to convince them to attend the rally.

Capital City Police Officer Ahmed Raza Tahir and Deputy Inspector General Ghulam Mehmood Dogar were asked to comment on the violation of the code of conduct for the rally, but did not reply to questions from this correspondent.

Walking the ramp: Babies’ day out