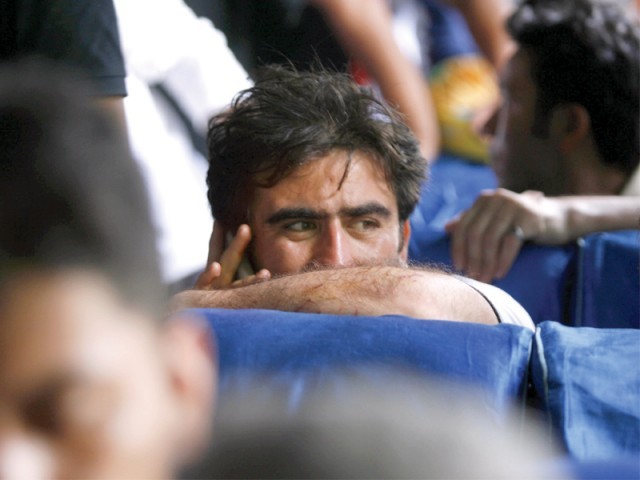 Survivors rescued after their boat sank in East Java, sit on their bus in Trenggalek. PHOTO: REUTERS

The crew and captain of an Indonesian boat – packed with illegal immigrants from Pakistan, Afghanistan and Iran – grabbed life vests and swam away as it sank during a heavy storm, leaving more than 200 passengers missing, including 55 people belonging to Quetta’s Hazara community.

Surviving asylum seekers said terrified passengers on the boat that was heading for Australia were left to drown as it broke apart in stormy seas about 90 km off the coast of Java (Indonesia) on Saturday.

According to elders of the Hazara community in Quetta, there were a total of 70 people from the Shia community onboard the ship — all illegal immigrants hailing from Quetta’s Alamdar Road aged between 19 and 22 years.

Meanwhile, Indonesian rescuers found 15 people alive on Monday in the area where the boat capsized, raising hopes of more survivors. Survivors found on a dinghy 100 km from the capsize are receiving medical treatment in a temporary shelter on the outskirts of Jember city in eastern Java and most cannot walk, an AFP correspondent said.

“I got on the boat in Java to go to Australia. After six hours in rough conditions, the boat capsized, and rescuers only found us days later,” another Pakistani survivor Muhammad Mehdi told AFP at the shelter.

The fibreglass vessel had a capacity of 100 but was carrying about 250 migrants – mostly Pakistanis, Afghans and Iranians – when it sank on Saturday, 40 nautical miles off eastern Java.

“I was informed by one of my relatives that my brother is missing along with 55 other people from Quetta after stormy tides hit the boat,” said Mehdi, who only gave his last name.

“I talked to my relatives who escaped unhurt and swam to the shore last night. They said 15 people are alive and they contacted their families in Quetta while the rest are still missing.” Quetta resident Nasir Ali said his brother Khadim Hussain was also alive and was admitted in a hospital in Jakarta.

“The boat was overloaded with over 250 people, including children and women,” Nasir told The Express Tribune, quoting his brother who he spoke to on Sunday.

Those escaping unhurt uploaded their photographs on Facebook and other websites in order to inform their families that they were still alive.

According to one of the survivor’s families, 30 people on average leave for Australia solely from Alamdar Road, an area dominated by the Hazara community and Shia Muslims in Quetta.

“We were just praying to God that someone would help us. We thought it was the last of our life story,” said Esmat Adine, 24, from Afghanistan.

How the immigration process works

Explaining the procedure of illegally migrating to Australia, Nasir Ali said his brother first travel to Thailand and then to Malaysia.

“An agent takes around $5,000 on arrival in Indonesia. Then the agent is paid $4,500 when the client reaches Australia,” he said.

Another member of the Hazara community told The Express Tribune that Shia Muslims, particularly Hazara people, show themselves as Afghan nationals in Indonesia in order to get Australian nationality citing threats to their lives in Afghanistan.

Rahem Jafferi, Ferhan’s cousin who is one of the missing illegal immigrants, said:

“A man can easily earn Rs0.5 million every month in Australia. Five boats left for Australia from Indonesia out of which four boats reached safely.”

“The FIA cannot arrest people or stop them from travelling as long as they possess valid documents. We did, however, arrest two agents recently and their cases are in courts,” he said.

(WITH ADDITIONAL INPUT FROM AFP, REUTERS)