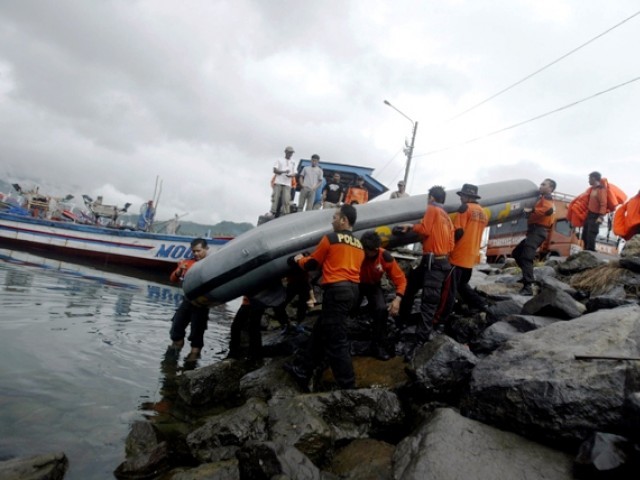 Members of a search and rescue team prepare to look for victims of a shinking boat in Watulimo on December 19, 2011. PHOTO: AFP

“Thirteen people were found alive but in weak condition. Rescuers found them in a dinghy in the waters off the island Nusa Barong and took them to shore,” Trenggalek district search and rescue official Kelik Purwanto told AFP.

“We are still trying to establish if they were victims of the capsized migrant boat on Saturday.”

The fibreglass vessel had a capacity of 100 but was carrying about 250 migrants – mostly Afghans and Iranians – when it sank on Saturday, 40 nautical miles off eastern Java.

Fishermen plucked 34 survivors from shark-infested waters six hours after the boat capsized and were taken to Blitar city on Sunday for identification by the International Organization for Migration (IOM), officials said.

More than 200 people are still unaccounted for.

Rescuers had held out little hope of finding more survivors in bad weather and high seas, calling it the “largest loss of life” yet from the sinking of one of the many boats packed with Asian and Middle Eastern migrants who undertake the perilous sea voyage from Indonesia to Australia.

“Visibility is really low. Currents are very strong, waves are up to three metres (10 feet) high and it has just started to rain,” Purwanto said earlier.

The 34 initial survivors were placed in a hotel at the IOM’s expense, Blitar immigration official Sutoyo told AFP.

“The IOM will determine the citizenship of the migrants and their motive for getting on the boat.”

Survivors interviewed by AFP said they were heading to Australia’s remote Christmas Island when their boat was hit by a storm and capsized.

Crew members and migrants had wrestled over 25 life vests on the doomed boat, officials said.

“The migrants said the six crew members had rushed for the life vests, put them on themselves and swam off,” East Java search and rescue agency chief Sutrisno told AFP.

The migrants were said to include Pakistanis, Iraqis, Turks and Saudis. They said they had paid agents between $2,500 and $5,000 to seek asylum in Australia and claimed their UN documentation papers were lost at sea.

Thousands of asylum-seekers head through Southeast Asian countries on their way to Australia every year and many link up with people-smugglers in Indonesia for the dangerous voyage on ramshackle boats.

Christmas Island is a favoured destination for people-smugglers, lying closer to Indonesia than Australia. Nearly 50 would-be migrants are believed to have died in wild seas during a shipwreck there in December 2010.

Australia’s Home Affairs Minister Jason Clare on Monday said Indonesia had requested help from Australian police to investigate people-smugglers, who he said had showed a “callous disregard for human life”.

“In addition to sending our military assets to help this morning, the Indonesians have also asked for our assistance with policing,” he told ABC radio, without saying how many officers would be sent.

“The only way to tackle this effectively (is) if you’ve got police forces in Australia and in Indonesia, police forces across the region working very closely together,” he said.

However, Canberra has suffered numerous setbacks in its attempts to enforce a regional strategy on the problem including an August rebuff from Australia’s High Court to its plans to institute offshore processing of asylum-seekers.

The Australian newspaper said an associate of Afghan human-trafficking kingpin Sayed Abbas was believed to be responsible for sending the latest boat on its ill-fated journey.

It reported that Indonesian authorities were investigating Haji Ismail, also known as Sayed Azad or Sayed Jalal, as a prime suspect after his name was supplied to investigators by survivors.

‘Only 29% of non-military US supplies go through Pakistan’: Report