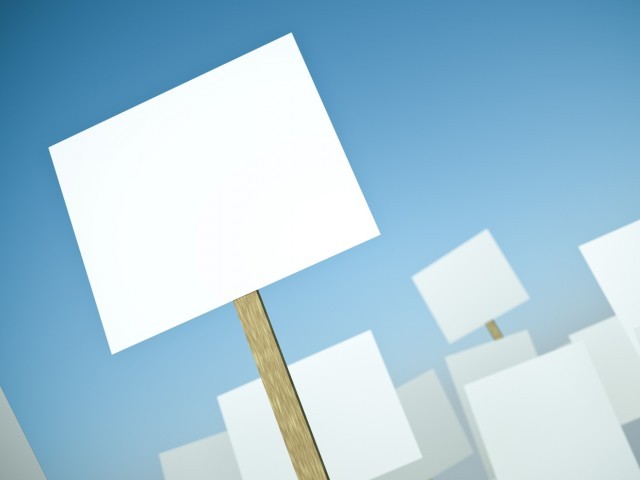 Discovery of mutilated bodies of Baloch missing persons and sectarian killings have become the norm.

Human Rights Commission Pakistan (HRCP), Balochistan chapter, took out a march in Quetta on Saturday to raise concerns over violation of human rights in the province.

According to HRCP, discovery of mutilated bodies of Baloch missing persons, sectarian killings as well as kidnapping for ransom of Hindus are on the rise in Balochistan. The rights group regrets that the issues receive little attention from both the government and the judiciary.

Only 30 people participated in the rally with 15 of them hailing from Hazara community.

“HRCP invited all political parties, traders, minorities, teachers as well as people from different walks of life to present a united front against lawlessness but majority of them did not take part due to decadent law and order situation, “said  Chairman HRCP Balochistan chapter, Tahir Hussain.

The march began from Jinnay Road and culminated at the Quetta Press Club. Merely two policemen were deputed to provide security cover to the demonstrators.

The protestors were carrying placards inscribed with slogans such as ‘Stop the killing of innocent people’ and ‘Everyone has the right to live.’

Addressing the gathering, Tahir Hussain asserted that HRCP had published four reports about the grave human rights situation in Balochistan.

“It was shameful that the government is claiming that 70 per cent missing persons have been recovered. If they consider the discovery of mutilated body as safe recovery then indeed they are correct,” he said sarcastically.

Hussain highlighted that people in Khuzdar, Mastung and Makuran divisions are not coming forward for registering their complaints. According to him, the reason lay in their sense of insecurity with the threat of enforced disappearances and targeted killing looming over them

Chairman of Hazara Jarga, Abdul Qayyum Changezi pointed out that over 600 people from Hazara community have been killed in sectarian violence since 2000. “I have not met with the Prime Minister in protest because we do not need assurance but practical steps for stopping these killings,” he said.