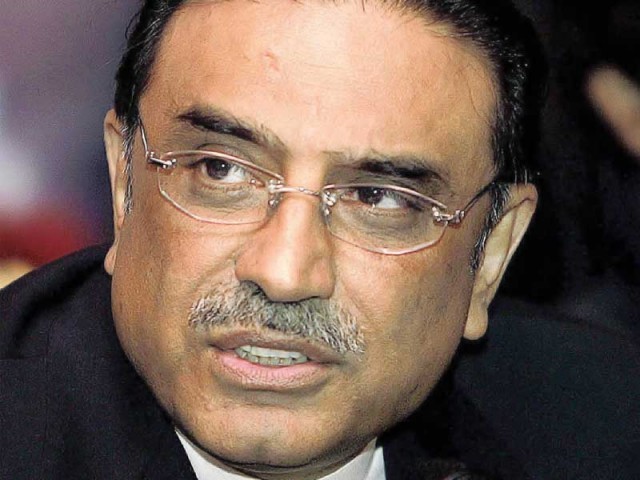 President Asif Ali Zardari The government abstained from submitting a reply by the president. This opens up a fresh issue between the executive and the judiciary.

All replies are in, except one – and perhaps the most important one.

Thursday saw the Supreme Court’s deadline pass with no reply from President Asif Ali Zardari in the Memogate scandal case.

Replies from the heads of the army and the Inter-Services Intelligence (ISI), however, were safely tucked away after they were submitted to Attorney General Maulvi Anwarul Haq. The military’s position appears to have been formed by ISI Director General Shuja Pasha, who seems convinced of foul-play following a shadowy meeting in London with US businessman Mansoor Ijaz.

The federal government did submit a reply: That the SC should dismiss the petition because sufficient investigations by the executive itself are already under way.

Also submitted through the Attorney General (AG), the government’s reply questioned the very necessity of the SC hearings, arguing that the parliamentary committee on national security is already probing Memogate. The government also restated its unwavering position that neither the president nor the prime minister nor any other government official have anything to do with the alleged memo.

Prime Minister Yousaf Raza Gilani’s response was to hold an emergency meeting with the AG and other close advisors.  Sources said the AG shared the details of the replies by the army and ISI chiefs – and his analysis was that the content of the documents had been very carefully drafted and recommendations about “national interest” are very clear.

According to a source, Kayani’s reply read as follows: “On October 24, DG ISI briefed me on the issue and his meeting with Mansoor Ijaz in London. In his opinion, sufficient material was available on the memo’s existence and that it had been passed to Admiral Mike Mullen.”

“He also opined that the evidence Mansoor Ijaz gave him was enough to establish that Mr Hussain Haqqani remained in touch with him from May 2011 onwards and exchanged numerous text messages and telephone calls. As per DG ISI’s assessment, the sequence of the text messages and telephone calls [between Ijaz and Haqqani] created a reasonable doubt regarding Haqqani’s association with the memo,” the reply went on to say, the source told The Express Tribune.

“There is nothing denying the fact that the memo exists and it is also admitted to have been delivered and received by the US authorities. Therefore, there may be a need to fully examine the facts and circumstances leading to the conception and issuance of the memo.”

Ijaz has his (long) say

The man responsible for breaking the Memogate story to the world, Mansoor Ijaz, offered to appear before the SC to present “physical evidence”, after filing his reply on Wednesday. A man known to like having his say, Ijaz’s reply is no less than 81 pages long.

A study of the document indicates that Ijaz took extraordinary interest in getting the memo through to Admiral Mike Mullen, as is evident from the number of calls he made to Haqqani and former US national security advisor General James Jones.

While Ijaz, as he has done since his initial Financial Times op-ed, happily sells Haqqani down the river, he is doubtful of President Zardari’s involvement. His reply reads: “It was entirely possible in my mind, given the adverse reaction Haqqani had shown me on the two telephone calls I had with him prior to this meeting, that Haqqani did not properly inform the government of Pakistan of his activities.”

A shadowy meeting at London hotel

In his reply, Ijaz details his meeting with General Pasha in London on October 22. The meeting, at which the ISI chief is supposed to have been convinced of Ijaz’s version of events, at times sounds like a scene from a spy thriller novel.

“We met … at the Park Lane Intercontinental Hotel, Room 210. We both agreed to take batteries out of our telephones while we spoke … He made clear he was in London with the consent of the army chief, Gen Kayani.

“…He asked questions, at times looked a bit astonished at what he was seeing but at no time did he offer any assessment of the data other than to indicate that the records were clear and convincing evidence.

“Intermittently during the data brief, I would open my computer or my Blackberry device and point out how the data was stored, transmitted, displayed, etc. He then carefully analysed dates, times, properties of Microsoft documents to see when the documents were created and how they fit into the timeline I was stating, looked at the original telephone bill logs, checked the time at which each BBM message was sent or received and reviewed my handwritten notes.”

More pin numbers, email addresses and other off-shoots of modern communications were examined. For the head of the ISI, the evidence was satisfactory. Where that now leaves the president, the government and the Supreme Court is a mystery even the best spy novelists might have trouble plotting.

Ijaz claimed that in a call made on May 9, 2011, Haqqani asked him to deliver a ‘verbal message’ to the Americans, preferably to Admiral Mullen. Ijaz called Haqqani the same day and said he had talked to General Jones, who had refused to convey any message to Admiral Mullen.

Ijaz said he drafted the memo on the basis of the handwritten notes he had taken when Haqqani first dictated points to him. Ijaz left a voicemail for Haqqani at his London hotel, asking him to call back for his response to his email containing the first draft of the memorandum.

He also, he claims, rang up General Jones, informing him that Haqqani would need to seek permission from the “requisite authority to let [the memo] go out” in writing. Ijaz informed Haqqani through Blackberry messenger that the memorandum was finally delivered to General Jones and that “it was now up to Admiral Mullen to decide how hard to push on General Kayani”.

Ijaz’s reply goes on to state he will reveal the names of two “key US persons” he contacted to convey the memo to Admiral Mullen, if the SC demands it.

(Read: The memo that opened the gates!)