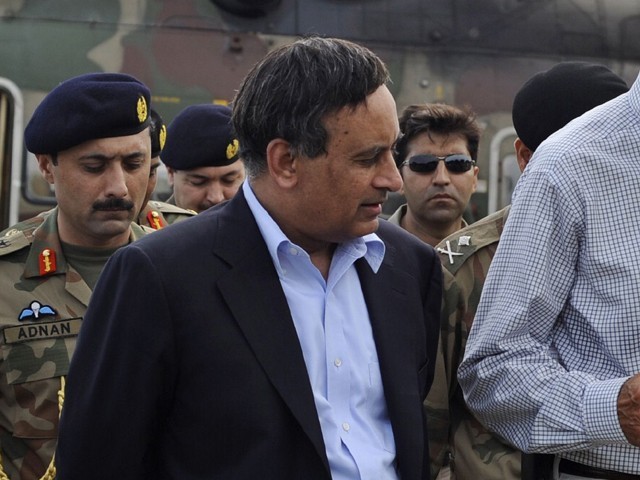 Pakistan's ambassador to US resigns after reports that Zardari asked Washington to help stave off an army takeover. PHOTO: AFP/FILE

WASHINGTON: Pakistan’s ambassador to Washington has offered to resign after reports that his boss, President Asif Ali Zardari, asked Washington for help to stave off a military takeover.

A Pakistani businessman alleged in a column in the Financial Times last month that a senior Pakistani diplomat asked for assistance in getting a message from Zardari to Admiral Mike Mullen, at the time chairman of the US Joint Chiefs of Staff.

The author, Mansoor Ijaz, alleged that Zardari feared a military takeover following the US raid that killed Osama bin Laden in Pakistan in May and brought unprecedented public scrutiny on Pakistani leaders.

Events in the months following the bin Laden raid have underscored the sharp tensions between Pakistan’s weak civilian government, headed by Zardari, and its military leadership, headed by General Ashfaq Kayani.

“I serve at the pleasure of the president of Pakistan and the prime minster of Pakistan. And I have communicated my willingness to resign or participate in any inquiry that brings to an end the vilification against the democratic government of Pakistan currently being undertaken by some elements in the country,” said Husain Haqqani, a former journalist who has been Pakistan’s ambassador to Washington since 2008.

There has been speculation in the Pakistani media that Haqqani had been involved in the conception or communicating of the memo.

Officials in the Pakistani government were not immediately available to say whether Haqqani’s offer had been accepted.

“I have not been named so far as having done anything wrong by anyone except through innuendo. No memo of the kind being discussed in the media was drafted or delivered by me,” Haqqani said.

“I should like to add that since I was appointed ambassador in 2008, some people have consistently vilified me as having been involved in undermining the Pakistani armed forces. Which I have never done.”

Asked about the memo referred to in the Financial Times column, Captain John Kirby, who was Mullen’s spokesman until the admiral stepped down earlier this year, said Mullen initially had no recollection of such a memo but was later able to track it down.

“Neither the contents of the memo nor the proof of its existence altered or affected in any way the manner in which Adm. Mullen conducted himself in his relationship with Gen. Kayani and the Pakistani government,” Kirby said. “He did not find it at all credible and took no note of it.”

He gave no further details.