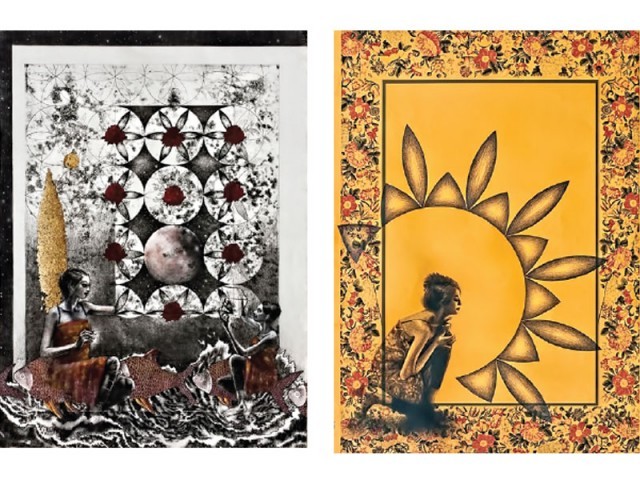 A collaborative show by artists Ali Asad, Dua Abbas and Wardha Shabbir, Conch Curve Creation, opened on Wednesday at the Drawing Room Art Gallery. The three artists worked together on each piece.

Gallery owner Sanam Taseer said, “It’s very hard to find collaborative work in Pakistan.” She added that the three artists were “the best at what they do and have made a name for themselves within one short year of graduating.”

“Multiple hands working on a single piece of artistic creation is an age-old tradition and has manifested in various forms across the world,” explain the artists. “If the 15th century Ottoman Empire had its Nakkashane, or studios where several artists worked on a single miniature painting, medieval Europe had its weaving industries, where members of a weaver’s household would work on different areas of the same tapestry.”

“This is the beginning of something very new and beautiful and has an illustrative story book sort of feel to it,” said model Aaminah Haq. “This is a new direction for art. I find tremendous aesthetic pleasure in the works”

“Keeping this rich tradition of collaborative work in mind, we have attempted, in the series of drawings displayed, a creative collaboration of our own.

Ali Asad contributed the motifs and the base while Wardha Shabbir has shown her skill in organic forms. Dua Abbas was behind the portraits.