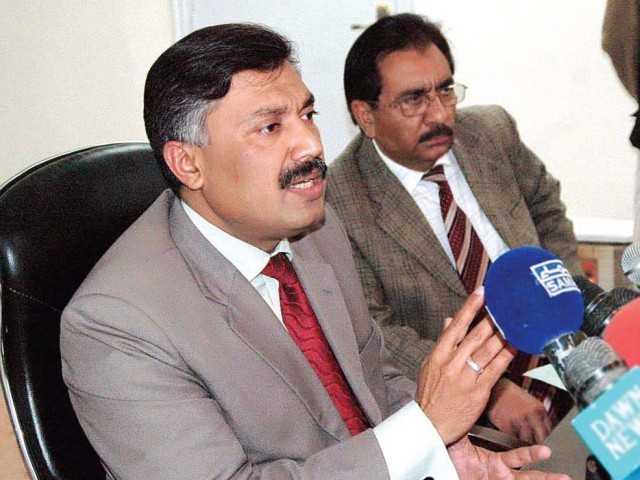 “I am not going to disclose the names of ministers allegedly charged with corruption cases since investigations are at an initial stage,” he said. The director-general did not disclose the nature of the cases either.

The watchdog has been authorised to hold inquiry into 25 cases this year, the director-general said, adding that of these, as many as 13 are being investigated by NAB while 11 references have been filed in courts, with four people convicted in these cases.

“NAB has recovered Rs200 million out of Rs3 billion in 25 cases, and a total of 22 accused have been arrested,” he said.

According to NAB, the major ongoing cases include those against officials of railway, zakat, food, and health departments.

“There are six cases against government officers from the [afore-mentioned] departments,” he said.

The authority has sealed three warehouses of the health department since thousands of sacks of wheat were missing from various food procurement centers.

Citing large scale corruption in various other departments, including the Balochistan Development Authority, the communication and works and the education departments, the provincial NAB chief said that “the menace has to be eradicated otherwise it will affect the rest of the province.”

About Rs15 million have been embezzled in Quetta Electric Supply Company besides corruption in procurement of machines for Bolan medical Complex and in the Ziarat earthquake victim funds, the official said.

He added that NAB will hold a seminar on Friday (today), marking the anti-corruption day.

Islamabad-Peshawar motorway: The going gets tough for highway travellers