It’s up to Islamabad to act now: Kabul

It’s up to Islamabad to act now: Kabul 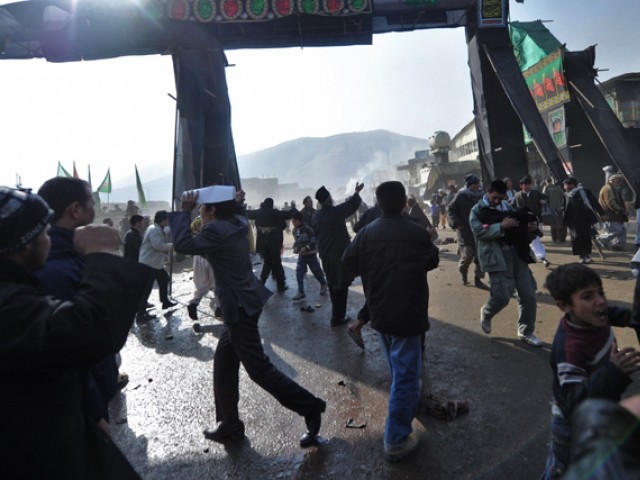 Afghans run from an explosion during a religious ceremony in Kabul city center on December 6, 2011. PHOTO: AFP/FILE

KABUL: The back-and-forth between the tense neighbours continued to unfold on Thursday as Afghanistan hit back at Pakistan after a shrine bombing killed at least 55 people in Kabul, saying it was up to Islamabad to act after a Pakistani group purportedly took responsibility.

In reply, an irritated Pakistan called for an end to this “blame game”.

Earlier on Wednesday, Pakistan had urged Afghanistan to provide hard evidence to support claims that Sunni militant group Lashkar-i-Jhangvi was behind the devastating attack on Shias after President Hamid Karzai demanded justice.

But in a developing war of words between the neighbours, whose relations are frequently tense, Kabul said on Thursday that it was up to Pakistan to investigate without waiting any longer. “It was the Lashkar-i-Jhangvi which claimed responsibility,” Aimal Faizi, Karzai’s spokesperson told AFP.

“It’s up to Pakistan to take action and find out where and how the contact was made by Lashkar-i-Jhangvi from inside Pakistan. They shouldn’t wait for us to provide them with evidence.”

Meanwhile, Islamabad called for an end to the “blame game” after Kabul demanded action against the group.

“It is high time to get out of the blame game as such and to move forward in the spirit of cooperation,” said foreign office spokesman Abdul Basit.

“Publicly accusing Pakistan of unfounded events will create problems at some stage,” he told reporters.

“We would like to have a relationship that is free of recrimination and blame game,” Basit added.