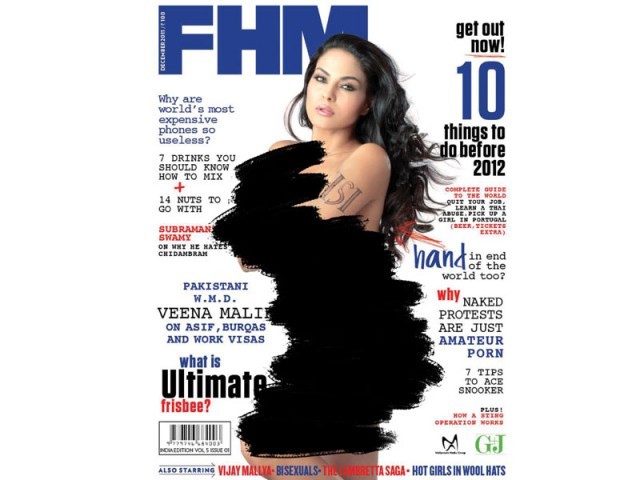 FHM India has countered Veena Malik’s claim of Rs100 million with their own claim of Indian rupees (INR) 250 million. Malik had earlier sent the popular mens magazine a legal notice for publishing what she claimed were ‘morphed’ nude pictures of her on its December issue cover.

(Read: Veena Malik files for Rs100m in damages from FHM)

Malik had claimed that the photos she had shot for the magazine had been morphed which had made her appear nude, and bearing a tattoo reading “ISI” prominently on her left shoulder.

FHM India in their 11 page legal reply to her notice categorically denied that her photo had been morphed, and that Malik was the one who had initially pursued the magazine for a shoot,

“Your client permitted our clients for her photo as well as video shoots which were carried out by our clients with the consent and authority of your client. It would be pertinent to mention herein that your client pursued FHM magazine via photographer Vishal Saxena in October 2011 for a shoot with FHM magazine. Your client wanted to do a sexy, bold and in-your-face shoot and to express intent for the same she also sent through Saxena pictures of her in Bikinis etc to show that she was in good shape for a shoot for FHM. After pursuing FHM for close to a month, on November 15th your client was sent a set of photographs for references through Vishal Saxena through e-mail and was explained the complete concept of the shoot. After receiving and understanding the concept of the shoot, on 19th November 2011, your client reverted directly to Sh. Kabeer Sharma through an e-mail with title “Love the Idea” saing she “likes the idea and concept very much and was comfortable to shoot” on 23rd November, 2011.”

The notice further described Malik at the time of the shoot as being extremely excited, the notice read:

“It is further stated that at the time of shot, your client was very comfortable and very much at ease shooting for FHM so much so that on several occasions the team had to tell her to tone down the exposure for the camera in keeping with the Indian censorship laws. Her excitement and comfort level can be easily seen from her video shoot and other photographs.”

“In response to the idea of wearing the tattoo of ISI is concerned, your client was very much eager, excited and willing to wear the tattoo of ISI. It is further stated that your client was not only well aware of the concept; she even proactively took part in the execution of the shot. Your client told to Priyanka Palkar, in presence of Sh. Kabeer Sharma, to make the ‘ISI’ marking on her shoulder “bolder and bigger” so that it could be “seen properly”.

“Even on November 29, 2011, your client reverted with an email titled “looking fwd to the cover” saying she had “seen” and was “happy with the pictures we shot on 23rd November, 2011 for FHM” and that she was looking forward to the cover.”

The magazine said that Malik was an unknown in Indian media prior to her controversial appearance on the reality tv show Big Boss where she was known to have indulged in acts deemed “shameful and outrageous” in both India and Malik’s native Pakistan. That Malik’s pictures in complete undress were already available online, being she was not new to controversy.

The notice closed claiming damages worth 250 million Indian rupees and for Malik to apologise for fabricating false claims in a press conference.

“We, by virtue of this notice, call upon your client to immediately give an unconditional apology by holding a press conference. it is further stated that in the circumstances out clients are free to initiate legal proceedings including filing a criminal complaint against your client for offences under the Indian Penal Code besides claiming general and special damages to the tune of Rs. 25,00,00,000/- (Rupees Twenty Five Crores only).”

Earlier, Veena Malik followed up her legal notice to FHM magazine by filing a police report in Mumbai and a complaint with the cyber crime wing against the FHM magazine editor and photographer.

Correction: An earlier version of the story misspelled the word crores. The error is regretted.