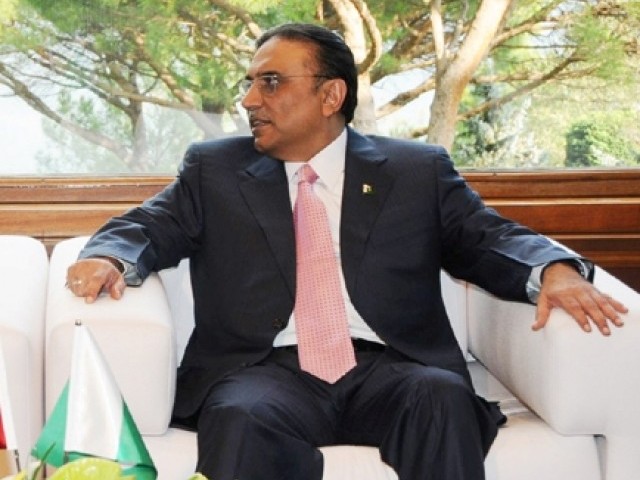 President's spokesman says involving the president in any court proceedings would be illegal. PHOTO: PID/ FILE

President Asif Ali Zardari has not yet made up his mind on filing a reply to the Supreme Court in the memogate case, Attorney General Maulvi Anwarul Haq told The Express Tribune.

The president’s spokesman, Farhatullah Babar, has already said that involving the president in any court proceeding would be illegal. Where the president may call it a ‘Hobson’s choice’ (a free choice in which only one option is offered), army officials are likely to comply with the orders of the apex court.

A senior army official said the JAG, the legal branch of the army, would deal with the SC’s order, which is binding on all institutions. Jurists say the replies are central to the Memogate case for these could be relied upon by the court in handing down a fiat.

Talking to The Express Tribune, a former judge said the affidavits of former directors general of Military Intelligence and Intelligence Bureau were treated as evidence in the case on the restoration of Justice Iftikhar Mohammad Chaudhry. “A reply is as good as evidence,” he added.

While the replies could be treated as evidence, these cannot diminish the need for a thorough investigation to unmask those behind the memogate affair. The Supreme Court had itself ordered the probe to “protect and preserve the evidence” and to check “the authenticity of the memorandum”. The court had also asked the yet-to-be-formed commission to ascertain circumstances under which the memo was sent to a foreign country and “whether its sending compromised the sovereignty, security and independence of Pakistan”.

The chief justice of Pakistan’s former spokesman, Ather Minallah, said the SC should have waited for the parliamentary committee on national security to investigate the matter before ordering a parallel probe. “Look what happened to the investigator of the NICL scam,” Minhallah said, referring to Zafar Qureshi, who was transferred along with his entire team after he traced the misappropriated money in the scam back to Moonis Elahi’s bank accounts.

Minallah said that although the SC has the power to form a commission, the probe would not be practicable. “How would the commission head, who had worked under the executive all his life, enter the presidency to investigate the president?” he asked. Besides, Mianallah added, the SC was not a trial court, where an official submitted a charge-sheet after registering an FIR.

He also chided PML-N chief Nawaz Sharif for preferring the SC over the committee. “Mian Sb (Nawaz) should know it is the political parties which strengthen the parliament. What would he do if tomorrow his government has to deal with rivals taking it to courts,” he asked.