Prohib­itive traini­ng costs and the dhoti are drivin­g youngs­ters away from the sport.
By Faraz Khan
Published: November 26, 2011
Tweet Email 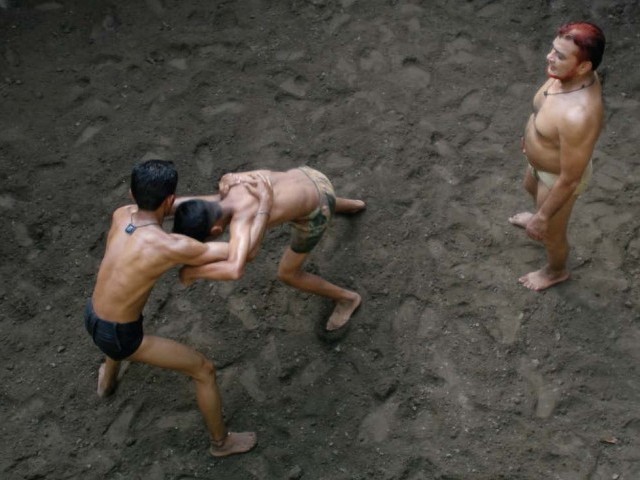 Two men wrestle each other at ‘Ali ka Akhara’ at Aram Bagh Park, which is one of the two arenas left in the city. The owners, Saeed Pehlwan and his brother, Chunnu Pehlwan are trying to save the dying sport. PHOTO: ATHAR KHAN/EXPRESS

KARACHI: Like many other sports, wrestling is also on the verge of extinction in Karachi and the number of arenas have gone down from over a thousand to only two.

In a square room in the corner of Aram Bagh Park, an old man smears herbal medicine on aching joints and prescribes the men drugs for the pain. At first glance, it may seem like a hakim’s clinic, but it is actually ‘Ali ka Akhara’,  an arena for wrestlers where many national and Asian level champions used to practice for competitions every day.

Unfortunately, the number of visitors has plummeted and it has now become a training centre for only one wrestler.

“I am ashamed to say that Ali ka Akhara, which used to be inundated with thousands of people, is now frequented by a handful of visitors,” said its creator, Chunnu Pehlwan. He and his brother, Saeed Pehlwan, opened their doors to the wrestlers of the city some 40 years ago. “Now, only our old clients come here. A large number of them merely come here to seek treatment,” he said.

In the past six years, only one man, Umair, has come to the arena for training. He was pushed to become a wrestler by his family. “Wrestling is in my blood because both my father and my grandfather engaged in the sport,” he said. “I tried very hard to convince my friends to join me, but they perceive wrestling and the arenas as a joke.” He said that he was still reluctant to appear in a dhoti with and an oiled body in front of his friends.

Chunnu Pehlwan said that wrestling is gradually dying in Karachi because of three major reasons – there is no scope, it is expensive and young men feel ashamed about wearing a dhoti. Moreover, body building has emerged as a strong competitor.

The city also has another arena, ‘Nasir Bholo ka Akhara’, which is on the verge of closure too. It is located near Pakistan Chowk and only two wrestlers practice with each other there. Other people go there just for body building. The chairman of the arena, Waseem Arif Tara, said that Rs1,000 to Rs5,000 is the daily cost of training. “When the costs are so high, who in their right mind would take an interest?” he said.

Three years of training are required to become a wrestler and 15 years is the best age to start out. The retirement age is usually 30.

Chunnu and his brother Saeed Pehlwan were trained by Haji Baseer, alias Paggal Pehlwan, when they were teenagers. Both brothers harboured dreams of becoming wrestlers and they often visited the arena of Paggal Pehlwan, where their interest was further developed. The two brothers have won various certificates after winning several wrestling competitions in India and Pakistan. Chunnu said that for a wrestler, the most important thing is a good work ethic. “You need to be extremely honest about your work if you want to succeed,” he said.