Husain Haqqani resigns as Pakistan's Ambassador to US

Husain Haqqani resigns as Pakistan's Ambassador to US 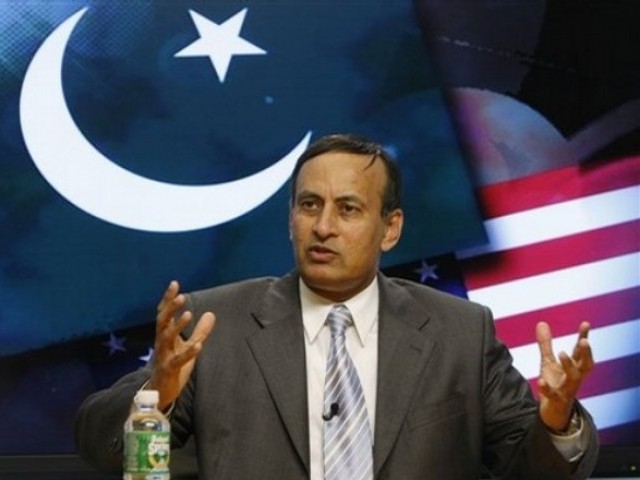 ISLAMABAD: Pakistan’s ambassador to the United States, Husain Haqqani tendered his resignation to Prime Minister Yousaf Raza Gilani on Tuesday, which was accepted by the premier.

Haqqani tweeted from his twitter account that he requested PM Gilani to accept his resignation for the sake of democracy.

I have requested PM Gilani to accept my resignation as Pakistan Ambasssador to US.

In a subsequent tweet he said that he still had a lot to contribute in building a new Pakistan.

I have much to contribute to building a new Pakistan free of bigotry & intolerance. Will focus energies on that.

Haqqani had served as Pakistan’s Ambassador to the United States since 2008.

He added that he was committed to work for Pakistan, “I have served Pakistan and Pakistani democracy to the best of my ability and will continue to do so.”

However, in a later statement that he gave to Reuters agency, Haqqani said that he had not resigned over the memo, that there were bigger things underfoot. “This is not about the memo,” Haqqani toldReuters, adding, “this is about bigger things.”  He declined to comment further.

A PM house spokesperson said that Haqqani had been asked to resign to make the inquiry process transparent. If he is cleared in the inquiry, the ambassador may be reinstated. The resignation did not mean that Haqqani was guilty.

Express 24/7 correspondent Sumera Khan said that her sources had said that the Army was not satisfied and had pressured for a resignation.

Prime Minister has directed a detailed investigation at an appropriate
level to be conducted in to the memo. Meanwhile, the prime minister had asked Pakistan Ambassador to the USA, Hussain Haqqani to submit his resignation so that the investigation can be carried out properly and in transparent manner, the spokesperson said.

The spokesperson added that everyone would be given a chance to present their views in the inquiry and that no one will be deprived of an opportunity to ask questions or raise concerns.

Sources have said that Mansoor Ijaz may be arriving in Pakistan later tonight.

Khan added that the venue for the troika meeting too had been shifted from the Presidency to the Prime Minister house, though no reason was given for the shift.

The controversial memo published online by foreign newspapers and brought to light by Pakistani-American businessman Mansoor Ijaz was allegedly conveyed to Admiral Mike Mullen by Pakistan’s ambassador to the US Husain Haqqani a week after the Osama bin Laden raid in May. The memo was allegedly sent by President Asif Ali Zardari who, as the memo claimed, feared a military takeover in Pakistan.

The memo referred to “a dangerous devolution of the ground situation in Islamabad where no control appears to be in place”.

It added that if the military does take over, Pakistan may “become a sanctuary for Osama bin Laden’s legacy and potentially the platform for far more rapid spread of al Qaeda’s brand of fanaticism and terror”.

The memo offered the US a greater role in Pakistan’s internal affairs in exchange for US help in preventing the military establishment from toppling the civilian government.

Haqqani, who has served as Pakistan’s representative to the US since 2008, denied that he had either drafted or delivered any memo.

Gilani has vehemently denied Zardari’s involvement in the scandal.