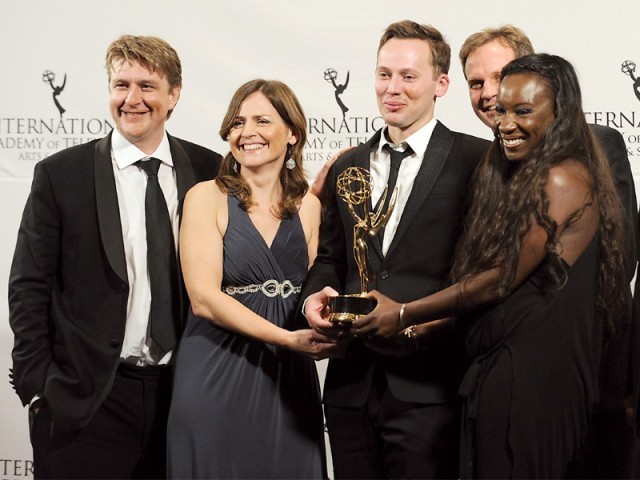 Tim Carter, CEO Twenty Twenty Television, and the cast of “The World’s Strictest Parents”, with the Non-Scripted Entertainment award for Britain. PHOTO: AFP

The 39th International Emmy Awards Gala, which honour television produced outside the United States, took place on November 21 at New York’s Hilton Hotel and was hosted by actor Jason Priestley. The International Academy presented 10 programme Emmy Awards and two special awards in front of an international audience of over 1,000 entertainment professionals and media executives.

The International Emmy Awards got an injection of Hollywood glamour when Lady Gaga took to the stage in an unannounced appearance to present the Founders Award to “American Idol” executive producer Nigel Lythgoe, who also executive produces “So You Think You Can Dance,” calling him her favourite executive in the business.

Lythgoe returned the warmth, saying that Gaga, who wore a relatively understated black gown and sported a long blonde wig and dark glasses, “certainly is, for my money, the most creatively talented woman in show business right now.”

The UK dominated the show, winning five of 10 competitive categories including Best Actress for Julie Walters and Best Actor for Christopher Eccleston.

The UK series “Accused,” which chronicles the stories of suspects awaiting trial verdicts, was named best drama. Eccleston won for his role on “Accused” while Walters triumphed for her performance as British Labour MP Mo Mowlam.

The arts programming and non-scripted, or reality, Emmys were both won by the UK’s Twenty Twenty Television for the opera-world set “Gareth Malone Goes to Glyndebourne,” and “The World’s Strictest Parents,” in which wild teenagers are sent to live with families run by strict parents.

Belgium, Chile, Portugal, Canada and Sweden each won one award, with Chile winning its first-ever Emmy, for children’s programming for “What Is Your Dream?” Belgium won best comedy series for “Benidorm Bastards,” a hidden camera show in which elderly people play tricks on younger folk. And Portugal won its second consecutive Emmy for telenovela, winning for revenge drama “Blood Ties,” about two sisters, one long presumed drowned in an accident survived by the other.

Among other honours, Sweden’s “Millennium”, while Canada won for its documentary, “Life With Murder”.

The award goes to…

Best Performance By An Actor

Best Performance By An Actress