Busted: Target killer and gangsters detained by the Rangers

Busted: Target killer and gangsters detained by the Rangers 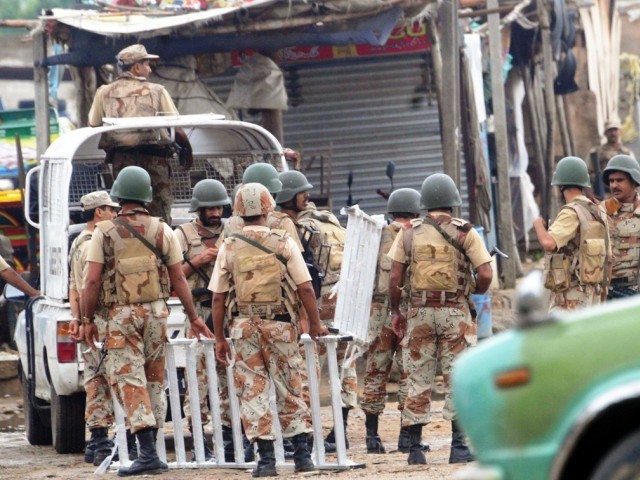 KARACHI: The authorities arrested more than a dozen suspects, including a target killer and two gangsters from the Arshad Pappu group, in raids all over the city on Wednesday.

Naik Wali Mehsud and Ali Buneri were arrested from Dawood Regency by the Rangers within the limits of Sachal police station. They claim that the men were affiliated with a political party but did not give any further details. Police sources said that the suspects were not handed over to them but were moved to an undisclosed location.

The Rangers conducted another raid in Lyari and caught more than a dozen suspects from Shah Baig Lane, Shah Abdul Bhittai road and Ali Mohammad Mohalla. A large quantity of weapons and drugs were seized. Sources claim that Omar Katchi from the Rehman Dakait group managed to escape.

The Risala police arrested two men allegedly from the Arshad Pappu group. They seized two TT pistols from them. The police said that Sameer and Rauf Baloch were wanted for several murder, attempted murder and police encounter cases. An alleged target killer identified as Yousuf and two other suspects were arrested by the Mochko police in Ittehad Town after an encounter.

They seized three TT pistols from them. The other suspects were identified as Lal Mohammad and Bahadur. The police said that Yousuf had confessed to killing around 10 people.