What goes into the making of a suicide bomber

What goes into the making of a suicide bomber

“There were six suicid­e bomber­s that attack­ed us in the middle of the night,” says Colone­l Nadeem, Comman­dant Dir...
By Iftikhar Firdous
Published: July 20, 2010
Tweet Email 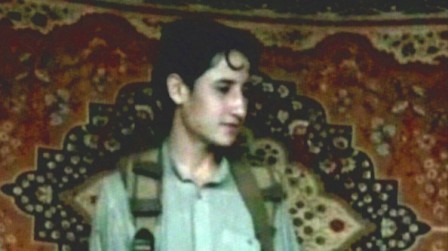 Video capture of a young suicide bomber whose video tape was recovered by authorities.

PESHAWAR: “There were six suicide bombers that attacked us in the middle of the night,” says Colonel Nadeem, Commandant Dir Operation. “Five of them detonated the explosives strapped to their bodies; however, one was missing till we discovered him hiding in the bushes. He was scared of killing himself because the effect of the drug had ended.”

Nadeem was referring to an attack in Lower Dir earlier this month.

The arrested bomber, between 17 and 19 years of age, was shot dead after he hurled a grenade, killing a security officer. But he did not pull the cord of his suicide jacket.

“Children who are trained as suicide bombers are injected with drugs to create an elated sense of the self. Once the effect of the drug wears off, the bomber is incapable of detonating himself,” says Nadeem.

The general perception of a suicide bomber is someone indoctrinated with religious fervour. However, authorities have always claimed that much more than simple indoctrination is required to carry out suicide attacks.

Medical tests and research seems to be justifying this understanding. High-level sources say the drug given to suicide bombers is called Pervitin, which is a chemical derivative of methamphetamine, a psychoactive stimulant.

Methamphetamine, which is commonly known as meth, is available in Pakistan in the form of medicine by the name of Ritalin, says Dr Mukhtar Azeemi, senior psychiatrist at the Lady Reading Hospital.

Its availability is scarce because of potential misuse, he adds. The drug is usually used for treatment of attention-deficit hyperactivity disorder.

Non-prescriptive use of the drug can cause paranoid psychosis, a term used to describe “loss of contact with reality” which helps users achieve their target without giving anything else a thought.

Pervitin was also used in Nazi-Germany. German paratroopers caught behind British lines were described as ‘fearless and berserk’, marching further than was considered humanly possible. Also Japanese kamikaze pilots were documented to be high on meth.

Pakistani officials believe that the drug is injected into the bombers, making the effect more lethal, yet also fast receding.

Nevertheless, poverty, oppression and illiteracy are factors that cannot be ruled out as leading many young people towards militancy.

The story of one would-be suicide bomber illustrates this point. Currently in Sabaon, an institution for the rehabilitation of those trained as suicide bombers, his story reflects how innocent children are turned into killing machines.

The bomber, whose name is kept confidential, was apprehended by security forces during a search operation. During interrogation he yelled “beat me more, as they tortured me before,” says a security official. “Upon hearing this, we took him out of solitary confinement and kept him with ourselves as he narrated his story. His father was a drug addict who hit him every day. At the age of 11 he was given some money by his mother to run away because she was afraid he would be killed by his father. He then found his way to a madrassa where the caretaker and his colleagues used to torture him. Escaping the torment, he ran away to Afghanistan where he joined the Taliban. They trained him in carrying out suicide attacks and sent him back to Pakistan where he was arrested.”

There have been 248 suicide attacks in Pakistan between 2002 and 2010. More than 3,000 civilians and 2,500 military personnel have lost their lives in these attacks. Yet, not much research has been conducted into the phenomenon called suicide bombing.

Report questions efficacy of US intelligence