Say more needs to be done in ‘next round of talks’.
By Kamran Yousaf
Published: November 10, 2011
Tweet Email 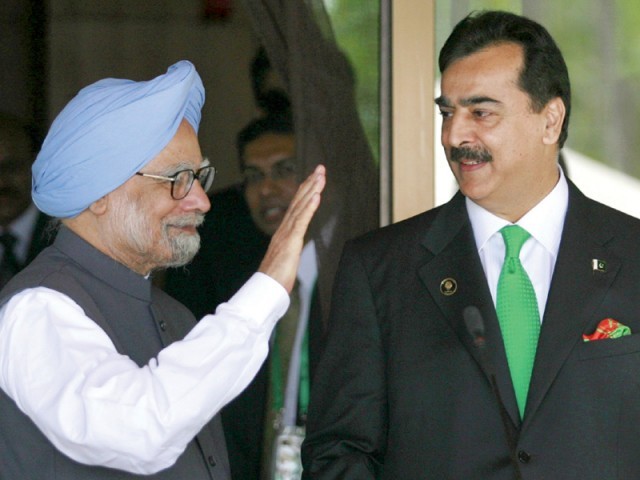 VILLINGILI ISLAND/MALDIVES: The prime ministers of Pakistan and India pledged on Thursday to write a ‘new chapter’ in their otherwise fragile relationship on the margins of the summit of the South Asian Association for Regional Cooperation (SAARC).

Prime Minister Yousaf Raza Gilani and his Indian counterpart Dr Manmohan Singh first held delegation-level talks for about half an hour, followed by a one-on-one meeting at the picturesque Shangri-La resort hotel on Villingili Island where an overnight stay can cost up to $2,000.

Appearing briefly before the media, both Gilani and Singh appeared positive, but added that they hoped that the next round of talks between the two nuclear-armed neighbours would be more “productive and constructive”.

The emphasis was on burying the past, looking ahead and working towards a resolution of lingering tensions between the two countries.

“We have discussed all core issues including Kashmir. We hope the next round will be more constructive, more positive, and will open a new chapter in the history of both the countries,” the premier told reporters.

Endorsing his view, the Indian prime minister remarked, “I always regard Gilani as a man of peace and every time I meet him my belief is further strengthened”.

‘Moving in the right direction’

Singh said the talks between the two countries had produced positive results since the resumption of the peace process earlier this year. However, he added, more needs to be done to overcome issues that divide the two neighbours.

At the same time, the Indian prime minister also emphasised the mutual benefits of working together, saying, “We wasted lot of time in the past in acrimonious debates”. Gilani also struck a reconciliatory note by saying the peace process between the two countries was moving in the right direction.

Briefing media after the talks, Indian Foreign Secre­tary Ranjan Mathai said Manmohan Singh said that the period of “accusations and counter-accusations was behind us,” and stressed on key initiatives that emerged from the talks that included the revival of the joint commission and the signing of a visa agreement.

Building on positive momentum generated by Pakistan granting India Most Favoured Nation status in principle, Mathai said the two countries are now planning to move towards a preferential trade agreement.

The two sides also decided to fast-track implementation of cross-border trade and confidence-building measures finalised in July. Commerce secretaries from both countries will meet on November 14 in New Delhi. This will be followed by talks between home secretaries in December that will focus on terror and security-related issues.

After the meeting, the leaders attended the opening session of the SAARC summit, where their host, Maldivian President Mohamed Nasheed, hailed their dialogue.

“These developments are extremely welcome,” he said. “I hope this summit will be enthused with optimism.”

In his keynote address at the newly built convention centre for the SAARC summit, Gilani said that South Asia had the potential to become a global economic superpower. “The cultural affinity among our peoples is a huge asset,” the premier remarked. He underlined the need for developing technology and alternative energy resources, adding that economic development in the region was closely linked to the availability of energy at affordable price.

Singh, who also addressed the summit, announced new measures to open his country’s markets for the least developed members of the association. He said his government had decided to reduce the number of items on the sensitive list from 480 to 25.

Afghan President Hamid Karzai also spoke, using the opportunity to allay Pakistan’s concerns about his country’s recent strategic partnership pact with India. “We are also looking for a long term partnership with the United States,” he added. “But let me assure you that these agreements are not aimed at any of our neighbours,” Karzai said.

Iran ‘will respond with full force’ to any military threat