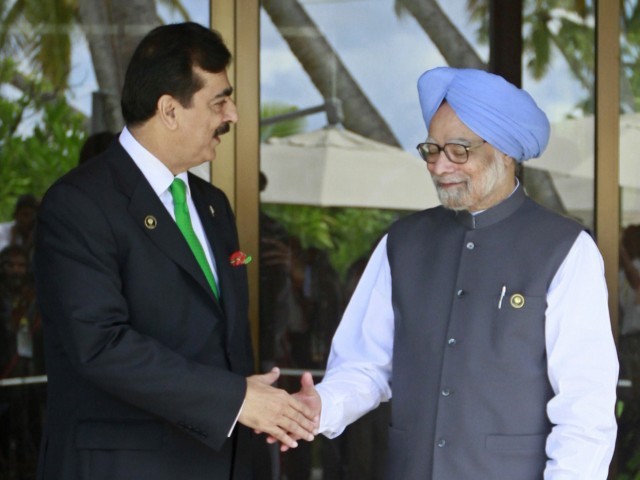 Pakistan's Prime Minister Yusuf Raza Gilani (L) and his Indian counterpart Manmohan Singh prepare shake hands before the 17th South Asian Association for Regional Cooperation (SAARC) summit, at the Shangri-La in Addu November 10, 2011. India and Pakistan hailed progress in diplomatic ties on Thursday, promising to open a "new chapter" in their fraught relationship at a next round of formal peace talks. PHOTO: REUTERS

Perhaps the mood was set by the setting; perhaps it was established by the tone of statements and discussions held over the past few months — most notably since March this year, when the prime ministers of Pakistan and India met at a cricket match. But certainly, the handshake between Prime Minister Yousaf Raza Gilani and his counterpart Manmohan Singh at the picturesque setting of Addu City on an atoll in the southern Maldives was a pleasant one. There appeared to be genuine warmth in the gesture and the discussion that took place between the two heads of government on the sidelines of the 17th Saarc regional conference appears to have gone well too. Even though no significant decisions with far-reaching effect were reached, the agreement to move ahead along the road to greater friendship is, in itself, an immensely important one.

This is especially relevant given the history between the two countries. Since the events of November 2008 in Mumbai, relations have been strained. It is only now that some semblance of normalcy is returning, the terse words of the past beginning to disappear from speeches. The decision by the Pakistan cabinet to grant India Most Favoured Nation status marked a step in this direction. And Gilani and Singh have indicated they both intend to continue to walk along the same road, stride in stride, reaching a goal of greater harmony and better understanding.

This is crucial to peace in the region and to an end to the militancy which remains, for now, one of the biggest burdens we bear on our shoulders. Militancy cannot end until there is dialogue with India and eventually some effort to resolve the Kashmir question. This, of course, will take time, but closer relations can only help the people of both countries. We must therefore be grateful that the sea breeze in the Maldives has blown in such good news with the leaders of both nations making it quite clear they wish to make a new beginning and allow the past to drift away as tides take a turn.