It is unfort­unate that the basic intent of the Qurani­c teachi­ngs and prescr­iption­s regard­ing women has freque­ntly been...
By Dr Riffat Hassan
Published: July 15, 2010
Tweet Email 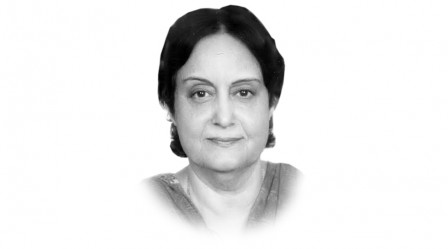 The writer is professor emerita at the University of Louisville, US

KARACHI: It is unfortunate that the basic intent of the Quranic teachings and prescriptions regarding women has frequently been disregarded in Muslim societies and communities. Women are often seen not as mentally and morally capable human beings who can be righteous by choice, but as mentally and morally deficient creatures on whom morality has to be imposed externally.

Not satisfied with “the outer garment” prescribed by the Holy Quran for Muslim women in a specific cultural context, some conservative Muslims (both men and women) have put pressure on women to cover themselves from head to foot leaving only the face and hands uncovered. Some have even gone further and taken the position that the face (except for the eyes) should also be covered. This kind of hijab was not mandated by the Quran nor found in the days of Prophet Muhammad (pbuh). Nor is it indigenous to urban Pakistani society.  In the context of requiring a woman to cover her face, well-known scholar on Islam, Dr Fathi Osman, has made an important observation: “In pilgrimage, where large numbers of women and men practice together, women do not cover their faces.”

According to Muhammad Asad: “The term hijab denotes anything that intervenes between two things, or conceals, shelters or protects the one from the other. It may be rendered, according to the context, as a ‘barrier’, ‘obstacle’, ‘partition’, ‘screen’, ‘curtain’, ‘veil’, etc., in both the concrete and abstract connotations of these words.”

In traditional societies it is customary to divide the world into ‘private space’ and ‘public space.’  The former is the home where women belong, and the latter is the rest of the world which belongs to men. It is assumed in these societies that an invisible ‘curtain’ (hijab) separates private and public spaces, and that as long as women and men remain in their respective spaces, everything is fine. But the moment the ‘barrier’ is crossed, for instance, by a woman entering the public space, the divinely-devised order is disturbed and all hell breaks loose.

The purpose of the Quranic legislation regarding women’s dress and conduct, was to make it safe for women to go about their daily business — which included the right to engage in gainful activity as stated in the Quran 4:32 — without fear of sexual molestation or harassment. However, a number of Pakistanis who regard the ‘chadar’ and ‘chaar-dewari’ believe that women should wear the hijab which covers most of their bodies (often including the face, except the eyes) and remain in private space. To them the segregation of women from men is crucial to preserving “the integrity of the Islamic way of life”.

However, if a woman loses all male support and has to enter public space to find means of subsistence, she must dress in such a way that she is virtually faceless. In essence hijab and segregation are the same because both aim at confining women and keeping them apart from, and outside the public space. It is important to mention here that confinement to the home was not the norm for chaste Muslim women but, rather, the punishment for unchaste women as stated in 4:15 (Quran): And as for those of your women who become guilty of immoral conduct, call upon four from among you who have witnessed their guilt; and if these bear witness thereto, confine the guilty women to their houses until death takes them away or God opens for them a way (through repentance).

In Dr Fathi Osman’s view, the Quran mandates modesty, not segregation.  He states: “The social role of women requires mixing with men. Islam does not permit any discrimination between men and women, nor does it advocate a segregation between them as it may be widely understood because of cultural practices or views. What Islam forbids actually is that a man and woman cannot stay together in seclusion and privacy (khalwa), if they are not married to each other and a sexual relation between them is possible. But men and women as individuals and groups can meet in public.”