A life of sacrifices

A life of sacrifices

Nusrat Bhutto will be fondly rememb­ered not only by the PPP but by all Pakist­anis.
By Editorial
Published: October 23, 2011
Tweet Email 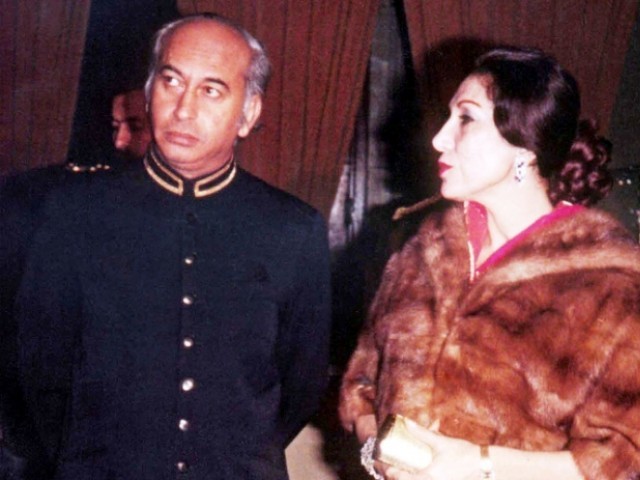 Unlike in countries like the US, the wives of heads of states in Pakistan tend to stay away from the limelight and rarely join their spouses in campaigning and day-to-day politicking. Begum Nusrat Bhutto, who passed away in Dubai on October 23 after a long struggle with Alzheimer’s disease, was a notable exception. Her political career was forged and defined by tragedy. When her husband, Zulfikar Ali Bhutto, was executed by military dictator Zia-ul-Haq, Nusrat Bhutto took over the chairmanship of the PPP. It was a post she would hold for four years, during the party’s darkest days. Daughter Benazir had been anointed the heir apparent but was still too young to take the reins. Had the PPP been led by a lesser person, it may well have disintegrated.

It was Nusrat Bhutto’s destiny as the wife of a politician, who would rise against the prevailing status quo in Pakistan, to be surrounded by death and oppression. Her two sons Murtaza and Shahnawaz and her daughter Benazir all took the struggle against military rule in their differing ways. Such is the ruthlessness of politics in Pakistan that she outlived all of them, and only the apolitical daughter Sanam Bhutto is still alive. After Zia was assassinated and Benazir took over, Nusrat Bhutto became the symbol of the hope the PPP had inspired in millions. She took over the traditional Bhutto parliamentary seat in Larkana. Unfortunately, the growing political rivalry between Murtaza and Benazir forced their mother to take sides and she chose Murtaza. Still, she reconciled with her daughter after Murtaza’s tragic death.

Ultimately, Nusrat Bhutto will be remembered for her sacrifices, both personal and political, in the struggle for democracy. She took her fight to the courts, forcing the Supreme Court in 1977 to acquiesce to the unconstitutional takeover by Zia-ul-Haq. When the courts proved pliant to military adventurism, she took to the streets suffering beatings at the hands of Zia’s goons and was regularly jailed or placed under house arrest. She bore the indignities heaped on her by a military dictatorship with courage. For that, she will be fondly remembered not only by the PPP but by all Pakistanis.