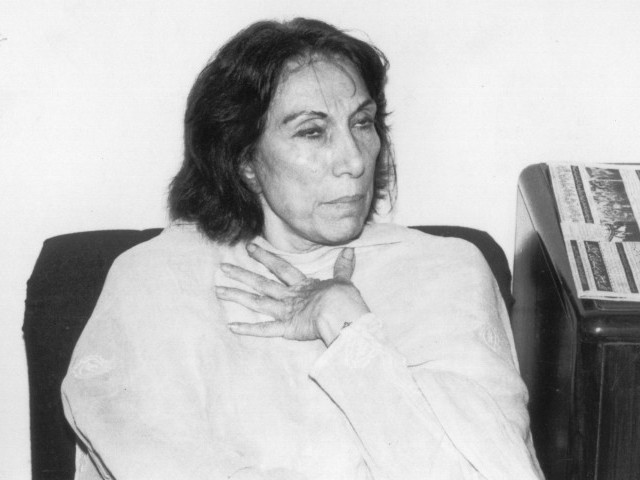 "Her picture after being clubbed in Gaddafi Stadium Lahore remains a strong symbol of struggle for democracy." PHOTO: EXPRESS/FILE

Sad News, Begum Nusrat Bhutto has passed away – a woman who has witnessed much of Pakistan’s brutal history

I recall with admiration Begum Bhutto’s defiant attempt to break the cordon around Pindi jail and get to ZAB. She faced Zia like a rock.

Ijazul Haq offering condolence for #BegumNusratBhutto on Geo TV. Mr. Haq, do you apologize for what your father did to her? Yes or no?????

Dad at the wheel, BB & Begum in the back, ppp workers hand got stuck in the window & Begum gave BB a smack 4 hurting the worker unknowingly.

Looked at @SalmaanTaseer, he looked at me…”the PM just got smacked” I whispered…peels of laughter

Her picture after being clubbed in #Gaddafi Stadium Lahore remains a strong symbol of struggle for democracy. RIP #NusratBhutto!

@fbhutto, on Geo right now, says that Nusrat’s grandchildren were not even told of her death and found out on TV.

Begum Nusrat Bhutto dies. Few would have gone through as much pain as she did. May Allah bless her soul. Ameen.

Punjab government gives out Rs0.5m to families of dengue victims