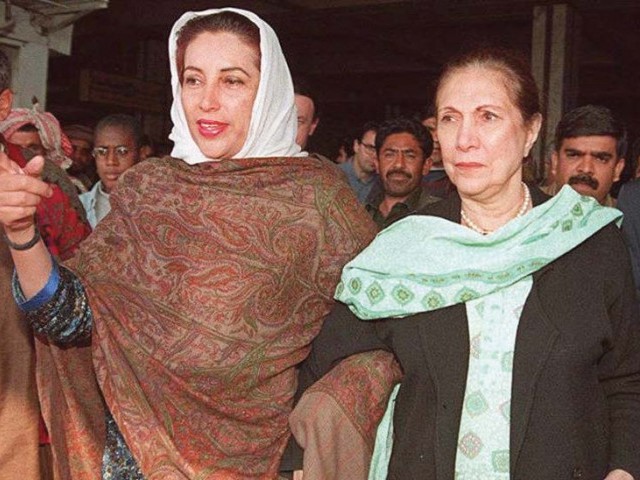 KARACHI: Begum Nusrat Bhutto, former first lady of Pakistan and the mother of former prime minister Benazir Bhutto, died at a Dubai hospital on Sunday afternoon. She was 82.

Nusrat was the wife of Zulfikar Ali Bhutto, the first democratically elected prime minister of Pakistan. She was suspected of suffering from cancer in 1982, the year when she left Pakistan for medical treatment. For the last several years of her life, she had also been suffering from Alzheimer’s Disease, an ailment that causes severe memory loss and cognitive impairment.

President Asif Ali Zardari, Nusrat Bhutto’s son-in-law, cut short his official trip to Jordan and will be escorting her body from Dubai to Pakistan on Monday (today) on a chartered plane. Nusrat’s only surviving child, her daughter Sanam Bhutto, and grandchildren, including Pakistan Peoples Party chairman Bilawal Bhutto Zardari, Bakhtawar and Aseefa also rushed to Dubai from London to accompany her body, which will be buried next to that of her late husband in the family graveyard in Garhi Khuda Bakhsh, Larkana. Prime Minister Yousaf Raza Gilani announced a public holiday on Monday, as well as a ten-day mourning period. The ruling PPP, the party founded by Nusrat’s husband, announced that it will suspend all political activities for the next 40 days to mourn her death.

Nusrat had been elected to the National Assembly twice and served as cabinet member in her daughter’s government in the 1990s. She rose to political prominence in the late 1970s and early 1980s, when she led protests and demonstrations against the military dictatorship that had overthrown her husband’s government.

In the mid-1990s, particularly after the death of her son Mir Murtaza Bhutto in 1996, she withdrew from public life. Party sources suggest this may also have coincided with the time that she began to show symptoms of Alzheimer’s.

Her disease was so advanced that she did not even know of the assassination of her daughter, Benazir, said one senior party leader, adding that she was on a ventilator most of the time during her final days.

The news of her death spread like wildfire in Sindh, a province that has been enamoured by the Bhutto family. There was some confusion, however, as to when the funeral prayers would be. A spokesperson for Bilawal House, PPP headquarters in Karachi, said that the funeral would take place on Monday, whereas officials at the Presidency in Islamabad were under the impression that it would take place on Tuesday. Pakistan International Airlines will be running special flights from Islamabad, Lahore and Karachi to Sukkur, for those who wish to attend the funeral.

Sources told The Express Tribune that the government will posthumously award her either the Hilal-e-Pakistan or a human rights award in recognition of her struggle for democracy in the country.

Nusrat Bhutto outlived all but one of her four children. One of her sons Shahnawaz was found murdered in an apartment in France. Murtaza, her elder son, was killed in a police shootout outside the family house in Karachi in 1996. And her daughter Benazir was assassinated in December 2007.

Nusrat’s death has once again highlighted the rift between her children. While the main funeral will be in Garhi Khuda Bakhsh, PPP-Shaheed Bhutto, a faction created by Mir Murtaza Bhutto, made separate arrangements.

“We have made arrangements at Al-Murtaza House, Larkana and 70 Clifton, Karachi, which are the real homes of Begum Bhutto,” said Ghulam Hussain Khawaja, the party spokesperson.

He added that Fatima and Ghinwa Bhutto, Murtaza’s daughter and widow respectively, had already left for Larkana, but Zulfiqar II, his son, will arrive from London later.

According to Mumtaz Bhutto, Zulfikar Ali Bhutto’s cousin, Nusrat wanted her son Murtaza to have a more prominent role in politics. “Many times, differences developed between Benazir and Begum Bhutto on the issue,” he said.