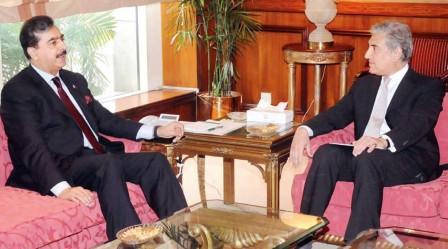 ISLAMABAD: Pakistan desires peaceful resolution of all disputes with India, Prime Minister Yousaf Raza Gilani said ahead of scheduled talks between the foreign ministers of Pakistan and India.

In a meeting with Foreign Minister Shah Mahmood Qureshi on Tuesday, Gilani expressed confidence that the July 15 meeting would pave the way for the resumption of composite dialogue between the two countries.

“The willingness to resume stalled dialogue presents a win-win situation for both the countries as peace and stability is the only way forward for the progress and prosperity of the South Asian region,” the premier added.

The prime minister said that the mechanism for the strategic dialogue between Pakistan and the United States would go a long way in building a sustainable, broad-based and long-term relationship between the two countries.

He added that Pakistan was looking forward to the visit of US Secretary of State Hillary Clinton later this month to take this process forward through the next round of dialogue scheduled to be held in Islamabad.

Foreign Minister Qureshi apprised the prime minister about the progress on the Friends of Democratic Pakistan. He also briefed Gilani on the upcoming visits of SM Krishna and Hillary Clinton to Pakistan.