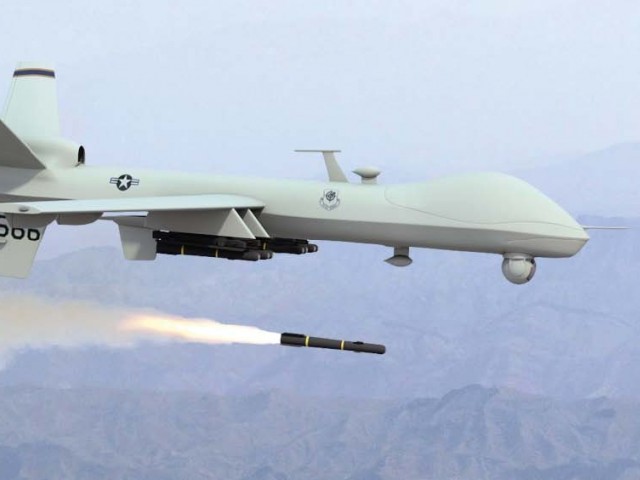 SOUTH WAZIRISTAN: A US drone strike targeting a militant compound in a Pakistani tribal region killed four rebels in the fourth attack in two days near the Afghan border, security officials said Saturday.

The drones fired eight missiles Friday night at the compound in Baghar, 40 kilometres west of Wana, the main town of South Waziristan tribal district, where the military launched a ground offensive two years ago.

“The strike killed four militants and wounded three others,” a senior security official told AFP on condition of anonymity.

He said the identities of those killed in the attack could not be immediately established.

Another security official confirmed the strike and said that the targeted compound was one of the few buildings used by mujahideen during the Afghan war against the former Soviet Union.

Baghar is a mountainous area covered by thick forests and is difficult to access. It is said to be used by Pakistani warlord Maulvi Nazir, whose fighters are allied to the Haqqani network and active in the 10-year war in Afghanistan

A US official in Washington described a commander in the al Qaeda-linked Haqqani network who was killed on Thursday as “the most senior Haqqani leader in Pakistan to be taken off the battlefield”.

Pakistani officials reported 10 militants killed in two US drone strikes on Thursday and named the Haqqani commander as Jamil Haqqani, a coordinator for the Afghan Taliban faction in North Waziristan.

The US official said he was known as Jamil and as Janbaz Zadran, accusing him of having “played a central role in helping the Haqqani network attack US and coalition targets in Kabul and southeastern Afghanistan”.

Pakistani officials said the slain commander was not a relative of Jalaluddin Haqqani, the Afghan warlord who founded the Taliban faction, but had been close to his son Sirajuddin Haqqani, who now runs the network.

The United States blames the Haqqanis for fuelling the 10-year insurgency in Afghanistan, attacking US-led Nato troops and working to destabilise the Western-backed government of Afghan President Hamid Karzai.

The tense partnership between Pakistan and the United States in the war on terror took a further battering this month, with Washington demanding that Islamabad take action against the Haqqani network and cut ties to the group.

The outgoing top US military officer Admiral Mike Mullen called the Haqqani network a “veritable arm” of Pakistan Inter-Services Intelligence (ISI) agency and accused Pakistan of supporting attacks on US targets in Afghanistan.

Islamabad officially denies any support for Haqqani activities, but has nurtured Pashtun warlords for decades as a way of influencing events across the border and offsetting the might of arch-rival India.

More than 50 strikes have been reported in Pakistan so far this year including dozens since Navy SEALs killed al Qaeda leader Osama bin Laden in the garrison city of Abbottabad, close to the capital Islamabad, on May 2.

Defense Secretary Leon Panetta has said for the first time that the United States was waging “war” in Pakistan against militants, referring to the covert CIA drone campaign that Washington refuses to discuss publicly.